I think our parents generation had an easier job of raising their children than we do.

Of course they shared the same worries that we do, they dealt with tantrums and runny noses, they changed dirty nappies and mopped up spilt milk.  They faced the same challenges.  But what made their job so much easier than ours, was that they did it without a constant barrage of opinion and advice.  At worst they had to deal with an overbearing mother-in-law.  But in the most part, they were left to get on with the job of raising their children with little interference from the outside world.


Today the whole world seems to be an expert on parenting.  Opinions are wrapped up as advice with the underlying tone being that if you don’t do it this way, you are a terrible parent and causing irrefutable damage to your children. 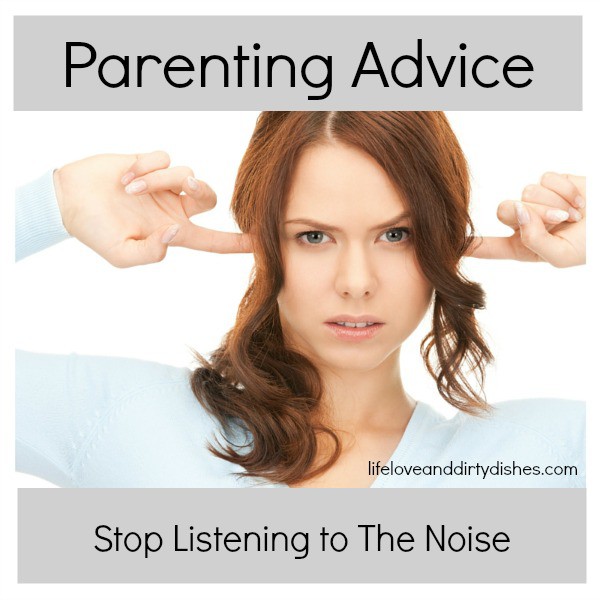 From the moment your baby takes their first breath the advice and the contradictions start. Breast is best, but you know don’t flaunt it in our faces or anything.  We are not used to seeing the female body splashed across billboards, on the cover of magazines or gyrating in music videos, so we are easily offended.

Wear your baby close to you for bonding and comfort, but watch they don’t get used to all this cuddling business, you’ll be making a rod for your own back.

Don’t leave your baby to cry as it will harm their emotional development, and anyway how would you like it?  But if you do leave them to cry they will be better sleepers, and we all know how important sleep is for their development.

Become a stay at home mum and watch as everyone assumes you are either rich or raking in the benefits whilst living a life of luxury.  Or return to work to set a good example for your children, but don’t work too much because otherwise why did you have children in the first place?

For every decision you make there is a whole brigade of people to tell you you should be doing it differently.  Quite often with no qualifications or expertise.

Then there are the actual ‘experts’ such as Jo Frost – aka Super Nanny, and Kathryn Meers The Three Day Nanny.  By her own admission, Kathryn found it incredibly hard to follow her own advice once she became a mother, and she didn’t cope as well as she thought she would.

“I think after going into people’s houses for 20 years and showing them how to take control and suddenly I’ve got something that size that won’t let me even put my lip gloss on that is what is so hard.”

Being able to tell others how it’s done, doesn’t always translate in your own life.   I have watched in open mouth awe as a reception class teacher held up her arm, and silence descended among the class of 4 and 5 year-olds, and they gave her their undivided attention.  No asking repeatedly, no shouting, no bribes.  She just held her arm in the air.  It was a beautiful thing to witness.  I asked that teacher if her own kids responded in the same way at home, after much laughter her response was “I wish”.

Even the things we are united in, are being called into disrepute.  I have offered, and been offered, many a sympathetic hug after a night with a teething baby.  However dental surgeons are now telling us that teething pain is a myth.  I wish my eldest son had been included in the study.  He cut his four incisors in one weekend.  I still shudder at the memory of that weekend.  The Lost Weekend, as we now refer to it.  Is stating that teething pain is a myth really helpful to parents?

So called ‘experts’ are telling us how to raise our children and what we can and cannot say to them. A quick glance at my news feed brings up the following ‘advice’…

Reward Charts Are Damaging Our Children:

Erica Reischer, clinical Psychologist is telling us not to use reward charts.  If we do we are raising a child who lives in a ‘reward economy‘ and only doing things for gains.  We are raising children to be selfish and not do something unless they get something in return.

If reward charts are bad then my eldest is in trouble.  He is going to require so much counselling when he is older if my potty training technique was anything to by.  Did I praise him when the wee wee finally went in the potty?  You bet your life I did.  There was singing and dancing and a victory parade involved.  We even phoned Nana to tell her, and she did the same.  Did I reward him for not weeing on my floor?  YES!  There were stickers everywhere!  Is there any long-term damage?  Well so far all I can report is that at 6 years old he is quite capable of going to the toilet by himself, and he no longer expects a rendition of “pee pee on the potty” and a sticker when he is finished.  He still quite often needs reminding to flush the chain though.

Robin Grille, also a psychologist believes that by praising our children, we are manipulating them and creating individuals whose self-esteem is dependent on others.  By calling your child a “good boy/girl” they can get addicted to the recognition and constantly seek to please others, rather than doing something because they genuinely want to do it.

I have always praised my children.  So much so that when the big one learnt to say “Please” he actually used to say, “peas good boy“.  I don’t think it’s done him any harm.  In fact he very much seems to genuinely want to play with his Lego every morning, despite my repeated requests to get his shoes on, because that’s what I want him to do.

The Naughty Step is Psychologically Harming Your Child:

Most households I know have a ‘naughty step’.  A place the kids go when they need a time-out.  However Psychiatrists Daniel J Siegel and Tina Payne Bryson are telling us that time outs could be damaging our children because their young minds interpret the isolation as rejection.

So we can’t reward our kids for learning new skills, we can’t praise them for good behaviour, and we can’t put them in time out for bad behaviour.

In the same way if we have a proud parent moment on Facebook or take part in The Motherhood Challenge, we are rubbing our smug happiness in the faces of those who are unable, or don’t want to have children.  I don’t know when sharing pictures of our children became so offensive to some people?

Likewise, when we are not being ‘smug’ and show the less glamorous aspects of parenting, the tears and the tantrums, we are slated because we are not enjoying and appreciating every single second of parenting.  People like Emma, from Brummy Mummy of 2, have been told they are unworthy parents for telling the truth about parenting, the good and the bad.

It’s no wonder that parents feel under so much pressure and feel like they are failing when the advice is constantly contradicting.  We are living in a world where our parenting skills are put under a microscope.

Heaven forbid you drop the ball and close your eyes to sneeze and find in that moment of distraction your kid has decided to make himself at home in the gorilla enclosure. Because then of course the world has a right to point the finger and say ‘bad mother’.  All the perfect parents will come out in force having read an article so, of course, that’s the same as being there and seeing what happened.  Suddenly everyone is an expert on gorilla behaviour and condemning a woman that could just have easily been you or me.

The advice, the judgement, the opinion.  It’s everywhere.  Knocking our confidence and putting us down at every opportunity.  Making us feel guilty for everything.

I asked my Facebook followers what was the best parenting advice they were given,  the one thing that genuinely helped them.  The majority said;

“Trust your own instincts.  No one knows your child better than you, so do what you think is best”

And that is the best advice, because it is true.  No one else knows what soothes your child when they are upset, what is a guaranteed red flag to a tantrum, what their favourite toy is, what their best ticklish spot is.  You are the one who knows the difference between a bedtime delay tactic and the start of a long night with the sick bucket.  You know how to kiss things better.  You know how many freckles they have on their forehead.

With so much advice coming at us from every which way, it gets increasingly difficult to hear our own voice, and trust our own instincts.

Social media isn’t going anywhere, parenting will continue to divide opinion and offend people, but we need to add a new skill to our parenting armory.  Along with the ability to kiss away the tears, catch vomit with our own hands, and recite The Gruffalo verbatim, we need to be able to tune out the noise.

We are not failing our kids.  We are doing a pretty good job at this parenting business. We will all face our own challenges, successes and failures.  We will make mistakes.  It’s okay, we’re human.  We learn and grow with our children.  Some days we are good cop, some days we are bad cop.  Every day we try to be the best parent that we can.  Somedays we are better than others.  Except for that day you gave your toddler the blue plate instead of the red one.  That day you were the worst parent ever. 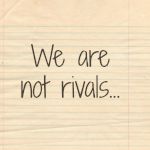 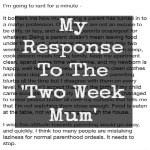 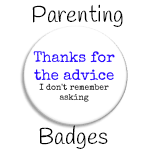 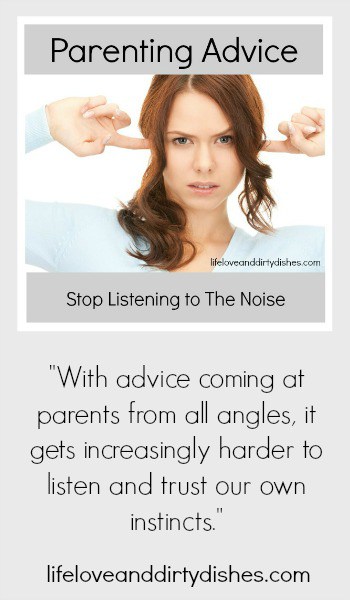 6 Comments on Parenting Advice: Stop Listening to The Noise