Life - Funny Stuff, School Days, So This Is Parenting, Toddlers Rule The World

I am the frazzled mum in the school playground.  The one who looks stressed, a bit sweaty, and pretty close to loosing her shit.  Why?  Because I have a toddler on the school run.

Let’s face it, getting out of the house with the kids in tow, on time, and ready to go, is no mean feat.  You feel like you’ve done a full days work and quite fancy sitting down with a glass of wine, and it’s only eight thirty in the morning.

And there’s still the actual walk to school to do.

When the toddler was a baby it was easier.  He was in a pushchair.  People cooed.  The biggest problem I had was getting to school with his shoes, socks, gloves and hat still on his body.  There were a few disapproving comments from old ladies about cold toes along the way.

But now my just-tuned-three-year-old refuses point blank to go in his pushchair.  So we walk to school.  Some days we run.  Man that kid is fast.  I liken it to interval training as he runs for thirty seconds with me running after, then stops for five seconds to shout “GO” and he’s off again, with me yelling at him to “slow down” and the big one to “hurry up”. Such fun! 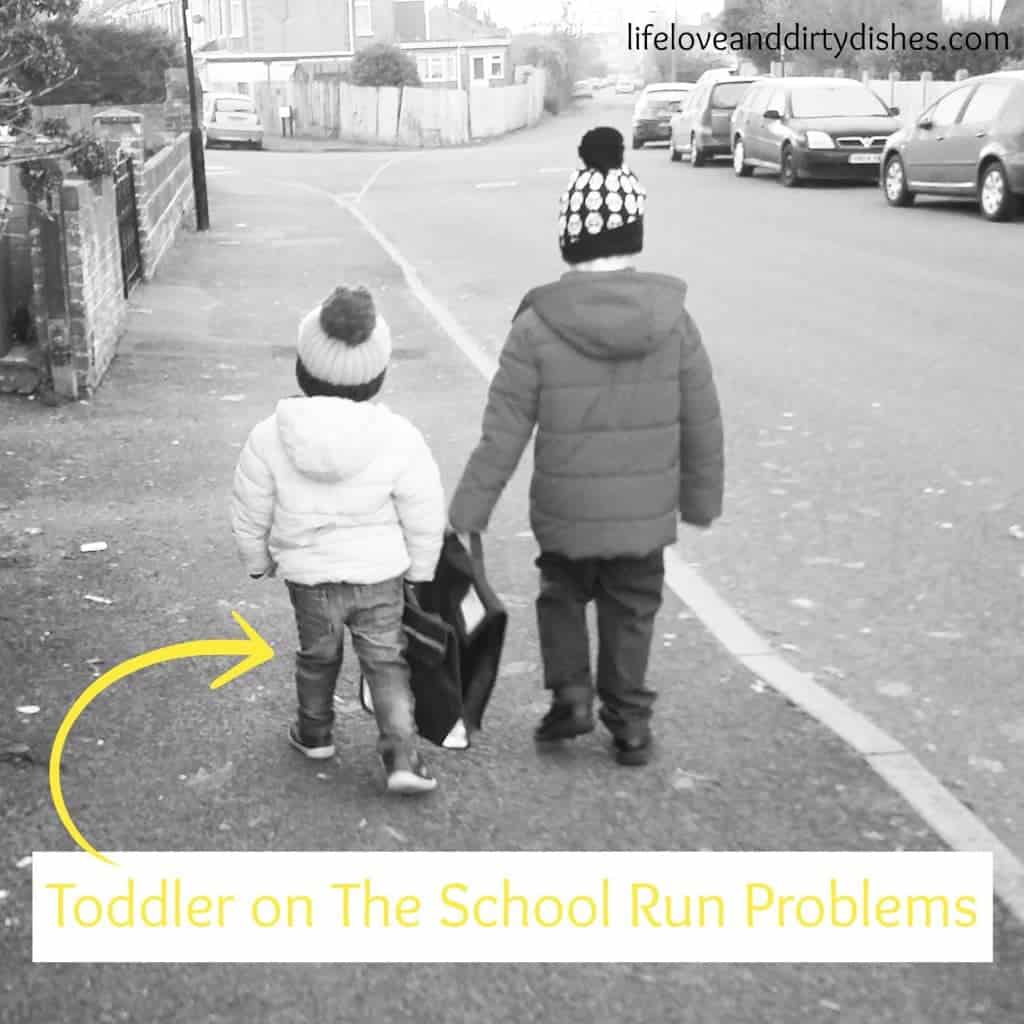 On good days he does cute toddler things like jump all the way to school.  Which is funny, except for the queue of people also on the school run building up behind us.  And the fact that before every jump I have to say “jump,” otherwise he just stands there shouting “JUMP” at me until I do.  As you can imagine the big one has infinite patience with this game and doesn’t moan about it at all.

On bad days he doesn’t want to walk in the direction of the school.  He wants to go the other way.  Of course he demonstrates this by refusing to walk at all.  He just stands there with me pleading with him to walk.

On one such occasion the big one decided he had had enough of waiting and dramatically announced that he was walking to school on his own, and off he flounced. I watched him storm off with my heart rate rising, until he got beyond the point I was comfortable with and was showing no signs of stopping.  At this point I turned into shouty mum, demanding him to “stop right now,” and issuing threats which if I follow through with, make my life just as difficult as his.

Eventually he stopped, but only after the threat of no TV has turned into a promise.  The toddler then decided to walk and we caught up with his brother who was protesting loudly about his punishment. That’s when they tag teamed me.  Again.  The toddler decided to start running, whilst the big one refused point blank to move unless I allowed him to watch Pokemon.  As I chased after the toddler whilst looking back at the big one, I thought to myself, this is the exact reason why they say you need eyes in the back of your head.

And this isn’t the only example of them tag teaming me.  Oh no.  Check out my facebook posts for more examples of how I am nailing the whole toddler on the school run thing.

And there’s more toddler on the school run problems…

Sometimes the toddler likes to play knock and run.  Such fun!

Other times when we get to school he hot foots it to the bike shed and I end up having to wrestle a scooter from him.  Such fun!

Sometimes he says goodbye to his brother then stands at the classroom door shouting for him to “COME BACK”.  Such fun!

Other times they tread in dog shit.  Such fun!

Sometimes I end up carrying the toddler and giving myself back ache for the rest of the day. Such fun!

Other times I overhear the person behind me ‘helpfully’ commenting that my child should be in a pushchair.

But as stressful as it is right now, I know that in a few short years he will no longer be a toddler on the school run.  He won’t want to hold my hand when we walk.  No longer will he stop to pick up sticks and leaves with unabashed awe.  He won’t be interested when I point to the fire engine.  Before I know it he won’t need me to walk with him at all.

So I suck it up. I apologise to the other mums who I have fragmented conversations with, and I hope we will be able to chat properly in a year or two.  Everyday I try to remember that every school run is an adventure for my little toddler.  But I stare wistfully at the kids in pushchairs and I mutter through gritted teeth, such fun!

12 Comments on Toddler on The School Run Problems