Before Kids vs After Kids, Life - Funny Stuff, So This Is Parenting
When we announced our pregnancy with our firstborn my Dad gave us some very good advice.

Do any decorating and home improvements before the baby comes, because after the baby comes you will not have the time, the money, or the inclination.

My Dad was right.  And we did follow his advice.  So much so that my ‘nesting’ was more ‘re-decorating’ and involved an impulse paint and re-carpet of our bedroom at 40 weeks pregnant.

The problem is that 6 and a half years later I’m getting bored with the decor and some rooms could do with a refresh.  Hence why I thought it would be a good idea to decorate our bedroom. I mean how long can it take to do a lick of paint?

Before I outline the decorating before and after kids differences, let me give you two bits of background information.

The husband and I are complete opposites, and generally our differences compliment each other.  We are Yin to the others yang.  Except when it comes to DIY.  If I ever have any kitchen Ideas, remind me that The Great Kitchen Tile of 2003 nearly ended in us getting divorced before we were actually married.

When we moved into our house 10 years ago, the bedroom had magnolia walls.  But beneath the surface there lurked a terrifying secret.  Fleur-de-lis. 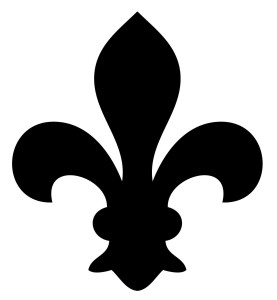 The previous owners had stenciled Fleur-de-lis all over the bedroom walls, and although they had been painted over you could still see the shadow of them on the walls.  We re-decorated shortly after moving in to get rid of the Fleur-de-lis, however two weeks after painting they started appearing again.  I make no exaggeration when I say there are 107 of them.  I counted.

We chose to ignore them until the next time we decided to decorate.  The 40 weeks pregnant redecorating.  Another two coats of paint and a 6 pound baby later they started appearing again.  So here we are 10 years later still living with Fleur-de-bastard-lis. 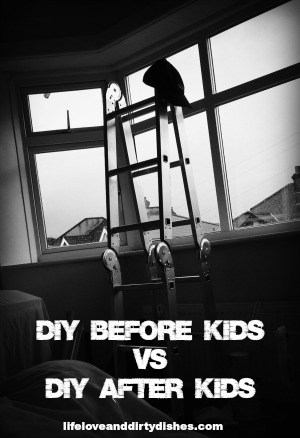 Before Kids… You wore scruffy DIY clothes and maybe put your hair in pigtails and wore a bandanna to look ‘cute’.

After Kids… You are alarmed to discover that your once worn out DIY clothes look positively smart compared to your normal day wear.  Your husband compliments you on your clothes. Although you don’t remember them being so snug last time.  You vow to buy new clothes and start a diet.

Before Kids… You spent a long weekend decorating and got the job done with time to go out for dinner.  No dramas.

After Kids… Decorating is only possible when the kids are asleep.  You paint one wall before falling into bed exhausted.  What once took a weekend now takes three weeks and in the meantime the laundry pile gets ignored and you can’t remember the last time you ate a dinner that wasn’t cheese on toast.

Before Kids… You had at least one spare room for storing furniture whilst you decorated the bedroom, giving you space to decorate and have impromptu dance offs whilst the paint dried. And you could sleep in the spare room.

After Kids… The spare rooms are now kids bedrooms.  There is nowhere to put the furniture. You push everything to one side of the room and squeeze past each other stubbing your toe on the step-ladder every single bloody time.  You have to climb over your other half to get into bed and you can no longer get to your underwear drawer.  You are freezing cold all night because the windows are open so you don’t get intoxicated my the paint smell.

Before Kids… You could have a screaming match and everything would restore to normal harmony by the second coat of paint.  And if it wasn’t one of you could sleep in the spare room.

After Kids… You whisper-shout at each other because you don’t want to wake the kids and you have to make up because there is no spare room.  You cry snotty tears* when after the second coat of paint you can still see the patches of stain block that you used to cover the Fleur-de-bastard-lis.

*In hindsight decorating when you’ve got the painters and decorators in yourself (sorry, couldn’t resist) is not the best idea.  DIY and hormones are not the best mix.

Before Kids… What’s that?

After Kids… Just to add to the bucketful of parenting guilt you already carry, you can now add failing to organise anything fun to do in the Easter Holidays because every spare moment you have you are painting.  Then there’s the guilt that the big one has watched back to back movies whilst the little one played with the remote control and may have licked a battery, just so you could meet your work deadline.  There’s also the fact that the little one wore his pajama bottoms all day because he had no clean trousers.  Or that you built a trip to B&Q up to be a fun and exciting outing.  No one had fun and it wasn’t exciting.

So the moral of this story is to listen to my dads advice.  Do all the DIY before you have kids. Then leave it for at least 15 years, after which they would have totally destroyed the place and you can start again.

Just in case you are interested, two coats of stain block and three coats of emulsion and we are Fleur-de-bastard-lis free!  It was worth it for that alone.

Have you had any DIY disasters?

If you want to be nosy and have a snoop around out finished bedroom click here. 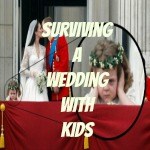 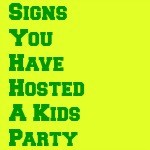 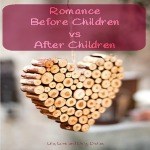 44 Comments on DIY Before Kids VS DIY After Kids