This weeks Rookie Mistake is from the very clever and funny Suzanne who blogs at And Another 10 Things. Suzanne made the rookie mistake of ‘popping’ to the shops with a toddler.  You never ‘pop’ anywhere with a toddler in tow.  Haven’t we all had a disastrous shopping trip in their company?

I don’t know about you but when the sun comes out it does something to my brain and I forget everything that happened the previous summer and make exactly the same mistakes. Oooh look it’s at least 15 degrees, let’s get a paddling pool out = draining fetid water and scrubbing all manner of crap out the bottom at 10pm whilst weeping about how you used to be cool*. Oooh, look at this super cute Joules sun hat, the Child is going to love that = where the f*** did I put that f***ing hat? That cost twenty pounds. Quick Husband dust out that lunch box and sellotape it to the Child’s head. She’s burning! SHE’S BURNING!

But without a doubt, the absolute worst decision I make every single time the sun comes out is thinking that it’s good idea to walk with the Child to the shop. To prove it here is a transcript of our latest expedition broken down, of course, into ten steps. 16.30pm: Wow, isn’t it a beautiful day, I’ve got half an hour until I need to start making that Jamie Oliver Mediterranean beany, fishy stewy thing. Child, shall we walk to the shop…? Well that was actually a rhetorical question which means we are walking to the shop… Of course you can take your scooter, that’s a lovely idea. Now where is that sun hat?

16.45pm: So it took a little longer than expected to get out of the house, but that’s ok. I’ll just whip up a salad with a honey vinaigrette from Pinterest or something. Oh, look at her scootering – I mean this is parenting. THIS is it, I’ve cracked it. I could totally handle another one. The Child would be scootering, the Child 2 would be in a sling. I should totally take a pictu… What do you mean you don’t want to scooter anymore you’ve only just started…? Well I’ll take it back to the house then…but will you want to scooter again in a minute…? Ok ok I’ll push it but you’ll have to walk

17.06pm: Oh wow, yes that is a dragon fly – well spotted. Oh yes and that’s a cat… yep, and a leaf…and stone…oh and another stone… well that’s dog poo…no don’t touch it…I SAID DON’T TOUCH IT…come on please we were meant to be home by now and we’re still practically on our doorstop.

17.16pm: Right, hold my hand across the road…no hold my hand…because it’s dangerous…I’m not asking again…stop screaming, I’m going to count to three…1…2…2 and a half…for the love of god just hold my hand.

17.18pm: Right, now you can let go of my hand…well I can’t really carry you and this scooter. Why don’t you scooter for a bit…? We’re nearly there now so just walk a little bit longer…you’re tired? Seriously YOU’RE tired…? Fine, but you’re walking home.

17.23pm: Ok, shall we get a trolley then I can push you round…? Ok we’ll get a basket…it might be too heavy for you to carry…Ok, ok push it round but watch that lady’s walking stick…

17.25pm: No you can’t have chocolate…or sweets… or crisps…or those razors…go on you can have a magazine but pick a nice one…look this one’s educational – five fun facts about worms. Doesn’t that sound good…? No, you want the one with plastic tat on the front? Fine, fine just put it in the basket…£3.75? £3.75? Well if you’re getting that I’m getting wine.

17.50pm: Ok, can you scooter home now…? Walk then…? My arms are full with the scooter and the shopping…Ok I’ll give you a shoulder ride…where did that chocolate bar come from…? Did we pay for that…? We’ll have to go back in now…Because you can’t just take things…

17.15pm: You can stop crying now we’re home. How can it take an hour and a half to get some mil…shit I forgot the sodding milk.

17.16pm: That’s it, we’re having oven baked random crap from the freezer for dinner and we’re eating it in front of the telly so we don’t have to talk to each other. Now where’s that bloody wine?

Please tell me I’m not the only one who’s lovely five minute walk in the sunshine to get some milk turns into an epic mission that ends in you spending £25 on stuff you don’t even need, a toddler sulking because you couldn’t find the stone they dropped and no milk. 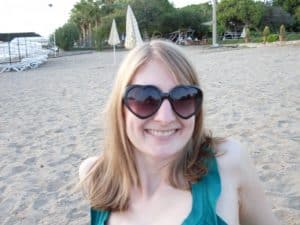 I’m Suzanne and after spending my twenties thinking about all the things I’d write if I had the time I’m determined to spend my thirties actually writing! As a mum of a two-year old my blog – and another ten things – explores the funnier side of parenting and life (or attempts to make the more difficult parts funny) in lists of ten. I originally set it up as a way to make myself write regularly but two months in I’m completely hooked on blogging. One day I’d love to make a living from writing but for now it’s how I spend my evening between my daughter’s bathtime and catching up on Neighbours.