This weeks Rookie Mistake is from Cécile who blogs at The Frenchie Mummy. Cécile has a tick list of Rookie Mistakes and parenting fails.  I’m sure you’ve done a few of these…

A Mummy Ticks so Many Boxes

Everyone would tell you that a mummy worthy of the name ticks many boxes. She is like a multi-skilled ninja on a mission to make bébé or les enfants happy. Occasionally, she is trying to do the same with the other-half as well, but they are not that important anymore.

Admirer, chauffeur, cleaner (yuck, the worst in my opinion…), cook, devotee, educator, friend, nurse, pillow, referee (with multiple kids), slave, supporter, and so many other labels that I am missing out here. C’est une maman!

I have only been being a mum for less than 6 months, but yet, I already ticked many boxes. * Having to feed le monstre (Baba) on the bus, tick. Did you miss Une photo, une histoire #1? It’s all in there so check it out. Attention! You might see a gorgeous babe. Just warning you… 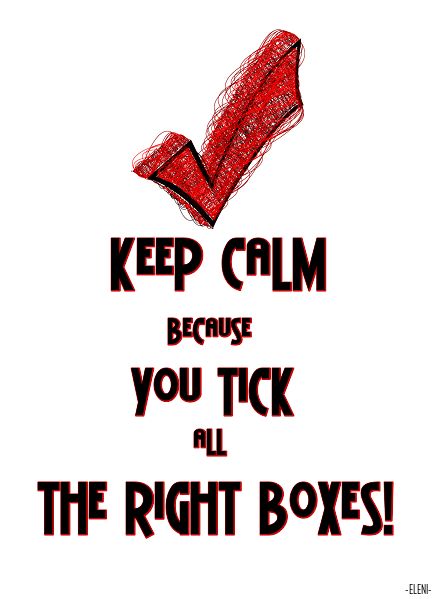 * Cleaning the baby in the boot as there were no other facilities when he did a massive moutarde, I mean énorme! Tick! Let me set the scene. We were out and about all day in Brighton. Eating nice food and having fun on a sunny day (for once! I have to say): c’était parfait. The day went by and we decided to go to a less busy beach. No need to say that I changed la couche before leaving. It would have been too easy. Baba fell asleep very quickly. Too quickly en fait…Next thing I knew, it was obvious he had done a massive poo when there was absolutely no facilities to change him. So I had no choice but rip his clothes off while he was lying in the boot and clean the dirty monkey on the car park… Now I am ready for ANYTHING.

* Leaving the house not dressed properly, meaning like any other human being. Double-tick! I am becoming a champion at that…Once I was out with some friends having lunch in a pub, I suddenly realised that my top’s label was rubbing against my chest. Yep, I put it the other way round. Either way nobody noticed it or my friends are very polite ladies…

Another example in this category took place just yesterday. As usual, we were leaving in a rush to go food shopping. My highlight of the day… Walking around the shop, I could see lots of people looking at me. I was wearing a nice beige dress. ‘Hum, people love my style’ I thought proudly. Reaching the till, packing the grocery away, paying it all, I caught the shop assistant giving me a weird look. At this point, I hadn’t realised my mistake yet. It’s only once we reached the carpark that I noticed the label was outside. In a rush to get ready, I put my dress inside out! No wonder why people were staring at me! I mean seriously. How embarrassing! I can’t believe Grumpy Boyfriend didn’t see anything. He is supposed to be the brainy one! No need to say that I will avoid this shop for the next ten years at least…

* Leaving shops without paying. Tick as well! You know what it’s like: the buggy, the bags all over it. You rush to do whatever you have to do. So once in Boots, I got to the till. Now let me tell you. I was in the baby section, so you would think that the facility is fitted for customers like me. Grave erreur! Struggling to manage the pram in the queue, I eventually reached the till and unpack all my shop: nappies, milk and more baby stuff. I literally bought the entire shop as I was stocking up for a couple of weeks. Around 12pm and the shop is full of people getting some lunch. No need to say that I got some dirty looks in the queue with my big shop. Furthermore, I stepped on a guy’s foot when I tried to reach the till. The queue area was ridiculously tight! I am a champion at driving around la poussette and even I was struggling! I was such in a rush to pack everything quickly so that all people can pay they sandwich and carry on their too short break. I was trying to be so nice indeed that I put all the stuff in my bag and just left. I didn’t mean to steal anything! I just wanted to leave and make some space for the other unhappy customers. ‘Excuse me madam? You haven’t paid’ OMG, it was getting worse and worse. I did so as quickly as possible and promptly left the shop.

* Scaring off Grumpy Boyfriend because I was constantly moaning. Tick, tick, tick and encore tick! Got it? I did it so well that he actually decided to run away from Baba and I. He is now actively looking for his own office and doesn’t want to work from home ever again. I think that Frenchie Mummy deserves a super badge for accomplishing this miracle! And let’s be honest, Baba is partially responsible for it as well. He can be fussy at times so it’s difficult for the other half to concentrate on his job.

What about you mummies? What is the best ever box you ticked? Share with us your best memory. I am sure you have some good ones like that! 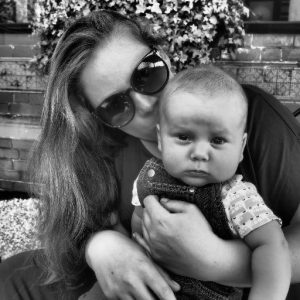 Bonjour! My name is Cécile, aka Frenchie Mummy.

Originally from France (bien sûr!), I moved to London 8 years ago to work as a languages assistant. It was supposed to only last a year, but I am still here, now working as a teacher in a secondary school.

I live in the South-East of London with Grumpy Boyfriend and Baba, my baby boy born in January.

First-time mum, I started my blog because I wanted to create my little space while I had some time off work. This project soon became a passion and 2 months later I am now officially addicted to blogging. My mum thinks it’s dangerous to put my son’s pictures all over the internet. My dad doesn’t even know what a blog is and probably thinks that his daughter is mad. La preuve, she even decided to stay in the UK and have a baby with a roast beef… Grumpy Boyfriend is keeping quiet, but I can see that he is very doubtful, while Baba loves the life of a babe (go and check out his pictures; you will see what I mean!)

The Frenchie Mummy Blog is not about being a super maman, with gorgeous Frenchie recipes. Instead, you will read my thoughts, my faves, my dislikes, my rants, my moans. It’s all about Me, Me, Me… and Baba. Oh and let’s not forget Grumpy Boyfriend! Genuine, honest and (hopefully!) funny, I will share all my adventures dans le monde des mamans.

Bienvenue to our Frenchie World!

3 Comments on Rookie Mistakes – Ticking all the Boxes