Hayley is one of my favourite bloggers and I’m sure you will be laughing and nodding along with this post.

Things That Are Dead To Me Since Becoming A Mother

When Claire asked me to write a guest post for her fabulously funny Rookie Mistakes series, my mind was bursting with ideas of what I could write about – with a theme like “parenting mistakes or mishaps” I have to say, I felt more than qualified! In fact the options open to me were pretty endless – I have had 3 kids in 3 years and its fair to say that there have been f*ck ups a plenty during that time!

But then I decided that rather than focusing on one particular stand out mishap moment – I would write about my biggest parenting rookie mistake of all.

This occurred right around the time that those two pink lines showed up on the pregnancy test back in 2012…when a few hours later, during a conversation with one of my best friends who was already a mother of two, I uttered the following fateful words…

“Oh but I’m not going to let motherhood change me. I’ll still be me! I’ll still have lots of other interests, I’ll still keep up with fashion trends, I won’t be one of those mums who lets herself go…oh no, the baby will just have to slot in around my lifestyle. It won’t be the other way around! Nothing really needs to change. And I DEFINITELY won’t be one of those mums who talks about her kids poo habits and the price of baby wipes. I’m still going to be cool!”

Well….I’m 4 years into motherhood now, and I have to say…I have become everything I swore I would never be!

To prove my point, I have compiled a little list for you…

Things That Are Dead To Me Since Becoming A Mother

Before I had kids, I used to be so precious about always matching my bra to my knickers. It would drive me MAD to wear a set that didn’t match! These days? Well….this Christmas my mother bought me some new bras and let’s just say they’re the first set of bras I have owned in four years that A)Were not maternity or nursing bras and B)Actually fit me!

Nobody warned me that your cup size can shoot up dramatically when you have children, and that they never quite return to their former glory – I was always ample in the chest department at a C cup before pregnancy, but now I’m left at an eye watering EE cup. It costs about a weeks wage just to get one bra that fits well, and your chance of finding slinky little pants to match for every day of the week are slim to none – and lets face it – these days I don’t want anybody going anywhere near them anyway, so what does it matter!!?

Again, before children fashion was a main focus in my life. I shopped all the time, my wardrobe was fit to bursting with clothing choices and I LOVED to keep up with all of the trends.

Now? Anything other than Maternity leggings feels weird to me and I haven’t even been pregnant for over a year (They keep your belly so warm! If leggings don’t start under my boobs these days then I have no interest in them!), the vast majority of items of clothing I own have at least one hole or bleach stain, and everything I wear ends up covered in wotsit dust, sick or drool (or all of the above) within a matter of moments anyway so why bother?!!

I used to have my hair cut and my roots done every 6 weeks without fail. Anything more than an inch of regrowth left me in a state of panic! I lovingly washed my hair every other day, deep conditioned it once a week and spent an hour or more each morning curling or straightening it depending on my mood.

Now? I’m 6 months overdue for my last hair appointment and I’m considering whether or not I can get away with telling people it’s a deliberate “Ombre” look…most of it fell out or snapped off when I was pregnant anyway, so whats the point?!

4) Not leaving the house without make up on

Ahh I remember when I would recoil in horror at the suggestion of stepping outside the front door without a full face of make up on. And to be fair, I did manage to keep this up until fairly recently…with one baby I still found time. With two, it was harder but I MADE time somehow. With three? forget it!! I officially give up!! By the time they’ve all stolen my brushes a million times and sucked on my beauty blender sponge, it’s more a layer of slobber and snot I’m applying than foundation anyway!

5) Up to date celebrity crushes

I did a YouTube video recently that asked who my celebrity crush was…No word of a lie, I could think of nobody. I could not name one single singer or movie star that anybody would have heard of in the last 5 years….the only person who came to mind? Was Anthony from The Wiggles. I shit you not.

I used to love reading. I would get through a book every week or so. And this is probably the thing I miss the most right now! And I try…every now and then I pick up a book in the hope that I might be able to read a chapter before one of the babies wakes up screaming, but it’s not going well….the only book I’ve read from start to finish in the last 6 months is The Gruffalo. I used to wait excitedly for Sophie Kinsella and Paige Toon to release new material….these days I hover on Julia Donaldson’s twitter account in the desperate hope that there may be some juicy new material for me to read 7 squillion times soon! Come on Julia, I can’t take much more of Room On The Broom!

I still have my old handbag collection from my pre-baby days. Its sits in a suitcase under my bed, waiting to see the light of day again. I had designer handbags for the day time, and sparkly little clutches for nights out. They were barely big enough to hold my phone, but that was ok….all I needed to bring out with me was a lipstick and some cash!

Now? I have a bag that’s roughly the size of a small tent, and weighs about as much as my 3 year old does – and it’s my ONLY bag because they don’t make many that are large enough to cater to the needs of a 3 under 3 mama! On the plus size, my upper arm strength has improved dramatically!

Cinema dates and club crawls, have been replaced with soft play Saturdays and taking it in turns to sit in each others houses and drink cold coffee whilst trying to squeeze in a sentence or two of conversation as you watch your tiny people tear others homes apart. 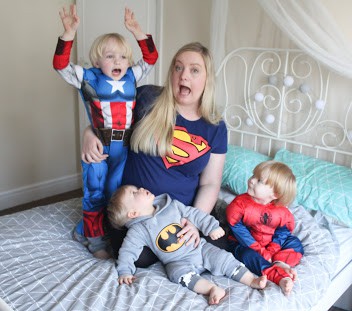 Hayley is a 30-something mum of 3 boys aged 3 and under from Liverpool, who currently lives in Devon. Her blog Sparkles & Stretchmarks is where she shares her anecdotes on life as a busy mum.