This weeks Rookie Mistake comes from Laura at The Unsung Mum.  Laura combines wit and illustrations to tell us about her swimming pool palaver.

The Unsung Mum and The Swimming Pool Palaver

Today, The Unsung Mum is taking The Kid and The Baby swimming. It’s a Sunday and a really stupid idea, as most people decide to do this also on a Sunday morning but The Unsung Mum broke the cardinal rule. Instead of spelling it out like she normally would, she said the actual, fucking, word. Tool.

The Unsung Mum has to now keep her word as since saying the stupid ‘S’ word her brood have done nothing but whine and whinge about going, until The Unsung Mum concludes it’s less painful to just take them bloody swimming, than to have to keep listening to them groaning about “not going right now.” 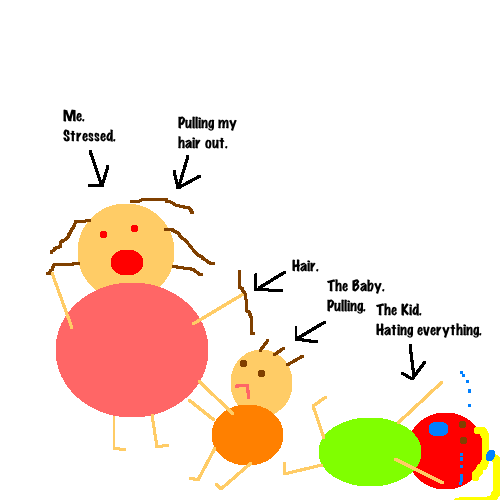 The Hub thinks that he is not coming swimming. He is under the ridiculous delusion that he needs to stay behind to do manly things like painting the hallway or fixing a loose shelf. 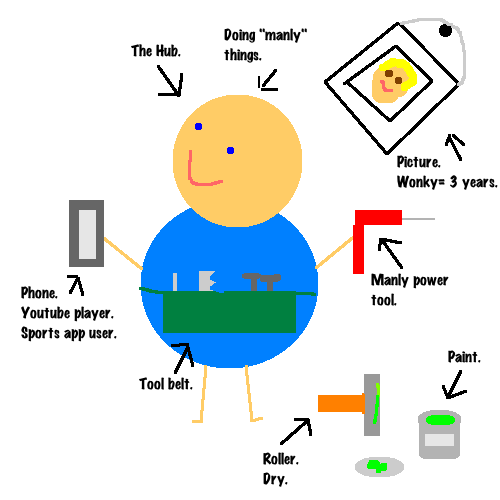 The Unsung Mum knows full well that the second she leaves the house, The Hub will sit on his ass for an hour and watch boring things about men with pointy ears in space or some crap sport shit, and only jump up when he hears the car hit the drive. 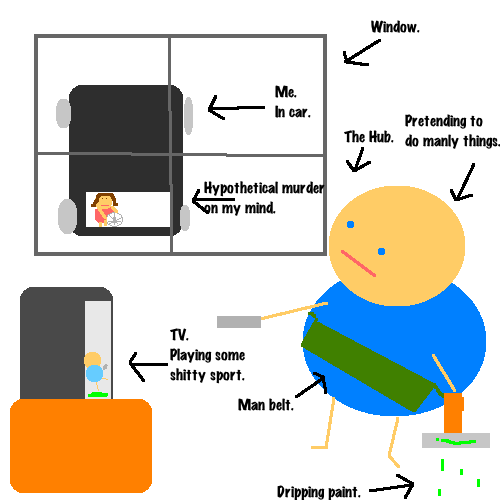 While The Unsung Mum knows that the huffing will now become a full day event, she doesn’t care, and tells him straight to man up and grow a fucking pair.

“Can you pack the swimming bags?’ asks The Unsung Mum.

The Hub has packed two towels, the wrong size swimming costume for The Kid, forgot a swimming nappy for The Baby and grabbed The Unsung Mums ten-year-old pre-kid bikini. 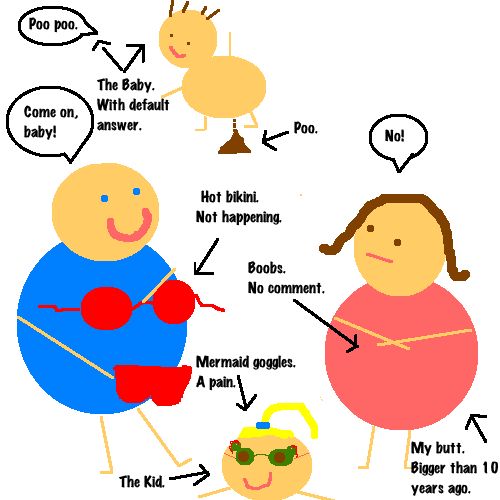 The Kid has packed her Little mermaid goggles that leak, a Peppa towel that’s really her sisters and a pair of pants.

The Unsung Mum says “Hub, where’s the rest of the towels? Oh, and just because I said you had to come, doesn’t mean I’m going to dress as a stripper. Kid, put The Baby’s towel down now and find your proper goggles, you know, the ones that make you look like a zombie.” 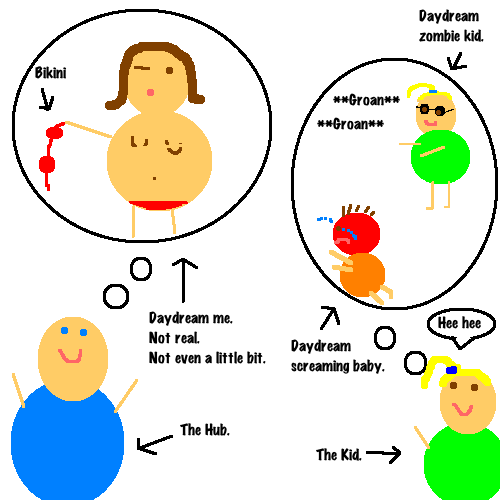 At the leisure centre, its fucking busy as normal and The Unsung Mum huffs and puffs until she gets to the front. The Hub has decided to take their brood to one side out of the way after The Kid asked a rather grey haired man “why his willy wasn’t inside his shorts” and if that lady over there “is really a girl, as she looks more like a man.” 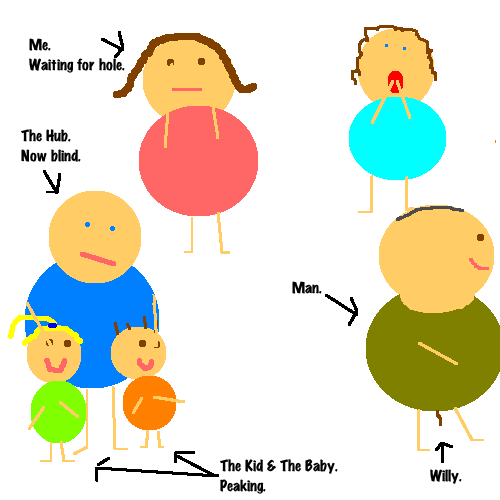 In the swimming pool changing rooms, The Kid and The Baby instantly strip off all their clothes and chuck them in as many different directions as possible.

The Unsung Mum continually barks “Pick up your fucking clothes! No Kid, your pants don’t belong on your sister’s head and yes having two legs in the same hole does make you look special.”

As the brood tear naked around the room, looking for tiny pools of water left by the previous occupants, The Unsung Mum waits for one of them to slip and hurt themselves and thus scream at The Unsung Mum while she snarls “I fucking told you so!” while listening out for the old busybodies tutting. 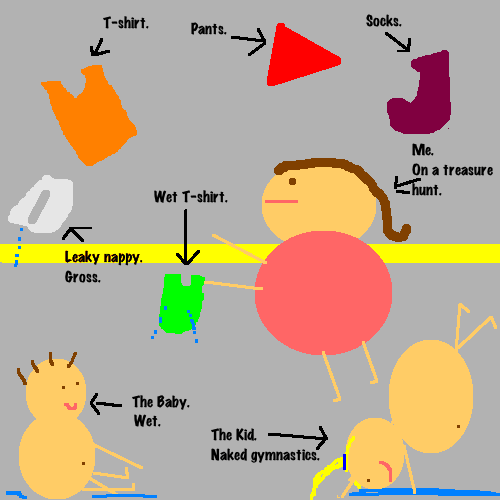 The Unsung Mum finally grabs The Baby under her arm and chucks The Kids swimming costume at The Hub with a look of “will you fucking help.” Mumbling under her breath about failed condoms and bacteria smeared shitholes, she finishes dressing The Baby and starts on the treasure hunt that is finding all the clothes.

The Hub has successfully gotten The Kid dressed and proceeds to get undressed himself and pack his clothes neatly back into the bag. “What’s THAT Daddy?” The Kid asks, lunging forward to touch his nether region.

Laughing uncontrollably, The Unsung Mum throws his swimming suit at him while thinking that she has never seen him move so fast. Not even for the promise of a good ‘barbecue’. 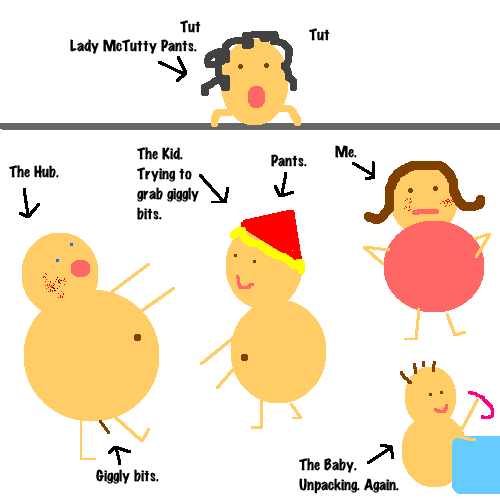 Hoping that nobody from social services overheard, The Unsung Mum attempts to wrestle herself into her own swimming costume while The Baby grabs her prickly legs and The Hub stares wide eyed in the tiniest hope that he might catch a glimpse of a boob.

The Unsung Mum realises too late that she really should have had a bikini wax a long time ago.

The Kid races out the changing rooms after The Hub and The Baby into the pool, while The Unsung Mum stalks after them, fruitlessly shrieking “Don’t run! Don’t jump! Stop splashing” as The Kid pushes past The Hub and cannonballs into the water on top of a lady with her newborn child. 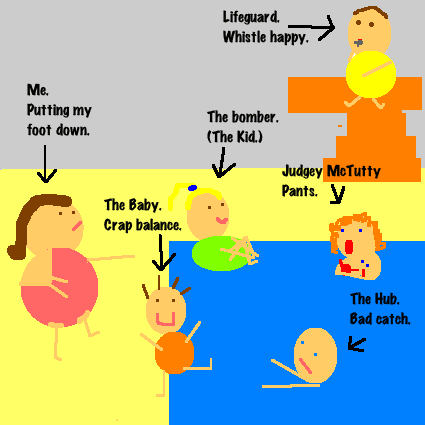 The Unsung Mum tentatively lowers herself into the pool, trying not to think about how much water The Baby will swallow this time and how much of that will be wee.

After almost half an hour, most of which is spent by The Kid running round the pool refusing to swim and The Baby screaming every time water touches her body, The Unsung Mum has had enough and orders everyone out.

The Unsung Mum is being tough (and is fed up of a cling on baby) and puts her foot down. “Out. Now.” Says The Unsung Mum. 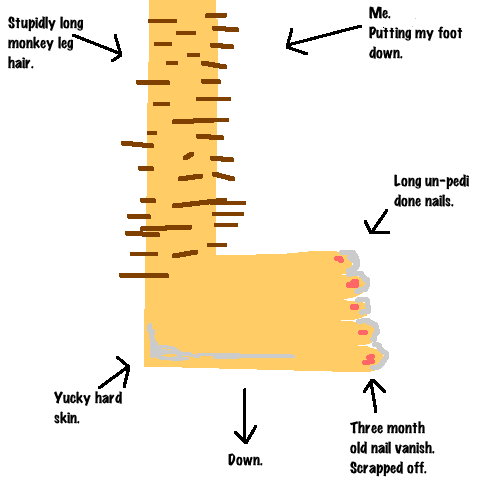 Both continue to scream.

“They can have another five minutes can’t they?” asks The Hub, keeping the screeching baby at arms length.

For fucks sake whispers The Unsung Mum as a lifeguard and lady judgey pants next to her tuts. “Five. More. Minutes.”

When everyone is finally dressed, both kids begin to demand a treat, beseeching once again the enchanted words ‘you promised!’ 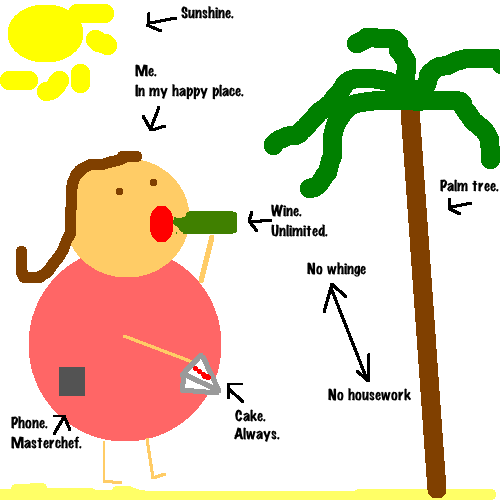 “I did not bloody promise” sighs The Unsung Mum. “I said you could if you were good and you weren’t. If you get in the car without running off, then we’ll see.”

Both kids run off. Demand a treat all the way home before lunch. The Unsung Mum swears under her breath. A lot.

At home, The Hub declares that The Unsung Mum now needs to look after the children solo so he can complete his man tasks in peace, aka, watch football on his phone while pretending to paint an old shelf. 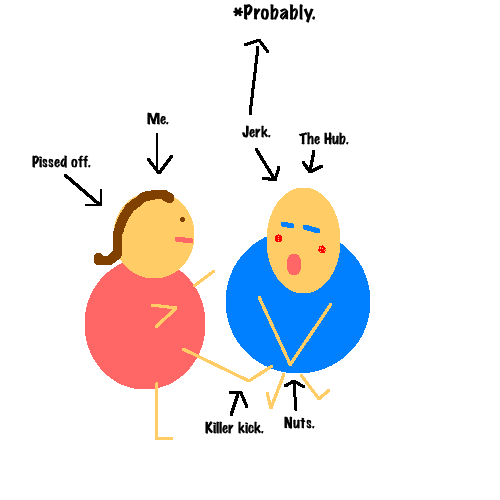 The Unsung Mum looks at the half empty paint tin and wonders how many of The Hubs body parts would fit in there before it became full. 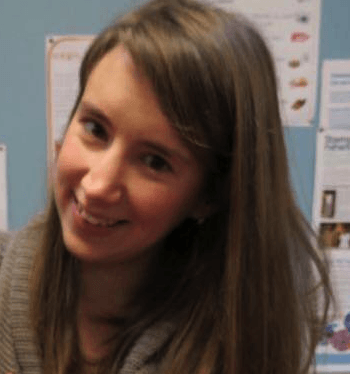 I’m Laura, a mum of two small girls and currently (prob) under the influence of no sleep. The Unsung Mum is a cartoon based blog which laughs in the face at parenthood. I set it up after blending my Gina Ford parenting book then franticly Googled mum sites to check if I was as bad at being a mother as I thought. Turns out I wasn’t, by a long way! Hence The Unsung Mum.