Rookie Mistakes will be taking a short break over the summer holidays.  The series has been running since September and has been host to some brilliant stories and fantastic bloggers.  Thank-you so much to all of you who have taken part.

We will be back in September and I already have some great posts lines up for you.  If you have a Rookie Mistake that you wish to share please to get in touch.  I will be sharing some of the most read posts over on facebook in the coming weeks.

In the meantime I thought I would leave you with one of my own Rookie Mistakes….

Scarring Your Child For Life

The big one has a phobia of people dressed up.  You might think I am being over dramatic with the word phobia.  You wouldn’t think this is you saw his reaction when faced with someone in a costume.  His fight or flight instinct kicks in and it is flight.  Every single time.  As fast as he can and as far away as he can get from the offending costume.  What follows in a monumental breakdown of shaking and tears and gripping onto me or his dad for dear life, whilst be begs us to take him home.  It takes a long time for him to calm down.  And that will not happen whilst we are in the vicinity of the person dressed up.

His fear weighs heavy on his mind.  Any party invite is always followed by the question “Will there be anyone dressed up?”  As is any new destination.  He sees adverts for Disney Land on television and makes me promise to never take him there.

We have tried reassurance, we have tried explaining it’s just a person in a costume, we constantly promise him we will never make him go near someone dressed up.  We have made small progress.  Last weekend we went to a fete where there was a giant minion wandering around.  We actually managed to stay at the fete without an epic breakdown. There was a lot of reassurance administered, and he spent his whole time looking over his shoulder to make sure the minion was nowhere near him.  Not an easy feet when you’re on a bouncy castle.  I could see the relief flood through him when I said it was time to go. We praised him lots for how brave he had been.

It wasn’t always like this.  In fact it was quite the opposite.  At two years old we would have to prize him away from various dressed up characters to give other children a chance to say hello.  We have photographs of him sat on Noddy’s lap.  As parents we looked at the kids who were to nervous or shy to go near the characters and said “ah, bless” whilst being somewhat smug that that wasn’t our child.  Yes, I know no one likes a smug parent. Don’t worry, Karma’s a bitch.

The monumental change happened when he was three.  I was helping to organise a fete for his playgroup.  I hired a Fireman Sam costume and it was delivered to the house.  The big one was very excited about this and wanted Daddy to be Fireman Sam.  We were in his bedroom getting ready for bed when Daddy got home from work and came upstairs in the Fireman Sam costume.

There’s a reason these costumes are normally used in big open spaces.  They are huge!  And when you are three they are positively giants.  The big one took one look at Fireman Sam in his bedroom and screamed at Daddy to take it off.  And from that day on he has been terrified.

So we scarred our child for life.  The money I will save on not going to Disney Land will I fear be used for the therapy bills instead.

How far did you make it as a parent before you screwed your kid up?! 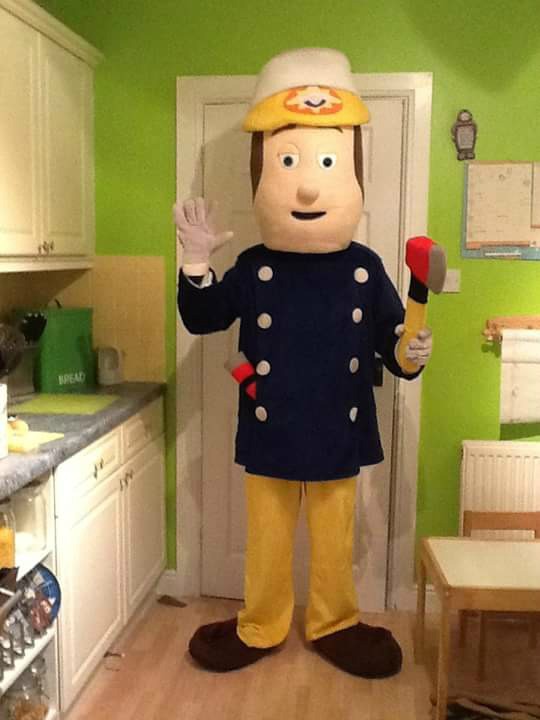 Yes, That’s Fireman Sam, waving his axe at me in my kitchen!

See you all in September for more Rookie Mistakes from guest bloggers.

1 Comment on Rookie Mistakes – Scarring Your Child For Life