It’s been a while since we’ve had a new rookie mistake.  This one from Neve who blogs at We The Parents.   Becoming a parent opens you up to an onslaught of advice from anyone and everyone, and I’m sure we’ve all made the Rookie Mistake of ignoring our own instincts and following the advice of someone else instead…

If you have a Rookie Mistake and would like to be part of the series you can find out more here.

Listen to Your Intuition NOT Your Mum

This is a tale of how I followed my mum’s breastfeeding advice instead of my own intuition.

Before I begin, let’s get one thing straight: my mum is a wonderful, caring and helpful woman, whom I love very much.

And with that honest yet mandatory disclaimer out the way, let’s get to it…

As a first-time mum, I had no idea that becoming a parent meant life would turn into a giant problem-solving, troubleshooting exercise. My firstborn was a challenging baby, to say the least. She screamed from the moment she was born until… well, she hasn’t really stopped yet and she turns 4 at the weekend! But what was wrong with my poor newborn baby? What could I do to alleviate her distress?

I felt at a complete loss.

And so… I called upon the wisdom of my mother to help me through it. She really loves a problem to solve, does my mum! A few days later and she moved into our two-bed apartment for a week and got down to it.

The first (and main) thing she did was to was to try and rule out hunger as a possible cause to the screaming. She encouraged me to feed my baby every three hours in order that I could be sure that any upset between feeds was not the reason that baby was so upset.

As a breastfeeding mum to three of her own babes, my mum knew what she was doing – well, back in the 80’s at least! Of course, thinking and guidance around breastfeeding have moved on somewhat since then – nowadays the advice is to feed on demand, back then forcing a schedule was the norm – but what she did worked for her, and so what could possibly be wrong with it?!

My intuition was screaming and I felt anxious to go against the advice of my midwives and health advisors, but going against my mum’s advice was not worth the pain it would bring! And also, I was tired and at my wit’s end. So I went along with mum’s plan….

In hindsight, my baby was hungry but I didn’t feed her unless the clock said it was time to, and my milk supply began to suffer. My baby stopped gaining weight and dropped down from the 60th to the 9th centile. It was awful. But every time I entertained the idea that the way I was feeding her was the cause, I was faced with a barrage of reasons why I shouldn’t change what I was doing:

“I only fed you babies for 5 minutes on each boob every 3 hours, and you’re all fine!”;

“Mum’s these days give into their children’s demands far too easily. See all these spoiled children around you? That’s what feeding on demand does! It makes spoiled children. Do you want your children to behave like spoiled little brats?!”

My mum so believed in her thinking around feeding that she had it out with breastfeeding counsellors and health advisors, and even they felt unable to argue with her!

When my daughter began eating solids at six months she settled down so much that I knew she hadn’t been getting enough milk from me. I suspected that feeding her on a schedule was part of the problem. Of course, I didn’t ever have this out with my mum; she was only trying her best to help me.

SIDE NOTE: You may be thinking that I’m passive and meek. I’m not. On the contrary, I pride myself in being an assertive person. But with my mum… ah, well, there’s a funny sort of dynamic there. I’m working on it! 😉

Actually, mothering wisdom from our elders can be priceless and much of my mum’s advice has indeed been life-saving. But first-time parents require a certain amount of space to problem solve for themselves. There are so many contrasting schools of thought on just about every aspect of parenting, it can easily get very noisy.

Nowadays, I’ve learned to shut it all out. I try to listen in carefully to my child and intuition. And if I get it completely wrong, Mum’s always on the other end of the phone to help me laugh about it! 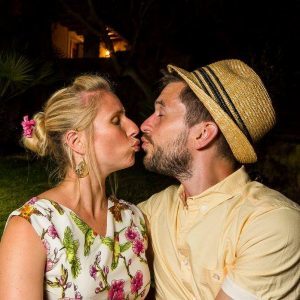 Neve and hubby Keane blog at WeTheParents.org. There, she writes to empower mums and bring out the humour in parenting, whilst he gets nerdy researching and reviewing gear for mums and dads.  f you’d like to read more from me, then come and see me at my blog, WeTheParents.org. I love to bring out the humour in parenting and enjoy getting nerdy reviewing the gear that (apparently) mums and dads need, such as baby carriers.