I love being complimented on my children’s manners.  It must mean I’m doing something right.  Although my children may have the best intentions it doesn’t always going to plan. Like the time we met my Son’s year R teacher.  I was having a smug mummy moment as said son was impressing his new teacher by doing an alphabet puzzle and knowing all his letters.  The teacher complimented him on how well he was doing to which he replied, “Thanks, It’s a bit tricky because I’m trying really hard not to parp.”

This weeks Rookie Mistake follows on from my little anecdote and is from Jade who blogs at The Parenting Jungle.

When you teach your children manners and it backfires with them farting in public.

As parents we want our children to grow up as sane, courteous members of polite society that can do their own laundry and eat their peas. As children we want them not to bite their friends and to go to bed when we tell them. Parenting is a constant state of trial and error. It’s like a science experiment without the protective goggles. We do our best. I have made many mistakes, I recently wrote a post on my top ten #parentfails, and as going to include of them in this feature…until yesterday…

Anyone else with a five year old son may also get slightly anxious when taking their child out for food. It is not a common occurrence in our house, it just happens when I cannot face the oven or the washing up. From the time he could speak I was trying to instil manners into my little terror; to say ‘TA’, to not lick his knife and I am CONSTANTLY pulling his finger out of his nose and instructing that it is not acceptable etiquette as we have food in the fridge (anyone else got a pathological nose picker?). I feel good manners are a good habit to have.

That said, there are only so many social graces a small child has…with all the disgusting things my son does I try not make a big deal of them, just quietly offer an alternative, like, ‘darling do you need a tissue?’ and ‘what do you say when we want something?’…pretty basic ABC type parenting. Positive behaviour is then followed up by lots of praise…I wish I got ice cream for using my cutlery appropriately.

Anyway there we were, sitting awkwardly in a booth, my other half and I anxiously looking at the little one who was overexcitedly driving his hot wheels round the table. We knew it was a risky move, he was hyped up from afterschool club and teetering on overtired hysteria. It is like waiting for a sea mine to go off. We ordered drinks..Leo demanded fizzy…we asked for juice…and waited for

our food anxiously glancing at the clock, playing I spy and hoping the chefs were swift for the sake of the other dinners sanity. I read the menu to little man twice, he played a game of angry birds, and thankfully our food arrived.

Little man dived into his sweet potato fries and I cut up his steak, we made a deal that he would eat some cucumber and salad…he could reach his drink..he didn’t need the toilet….all bases were covered.

I turned to my on food, I always order starters nowadays and get the boys both main meals as I know Leo will not want to eat half of his and if he kicks off I can take him outside after hastily eating my small plate of food. You would think I would have lot some weight becoming a mother. Nope. Besides from one rather gross instance of spitting a lump of steak onto the table dinner got eaten and pudding started, I saw the finish line in sight, we were enjoying ourselves.

Midway through our ice cream little man started giggling and swiftly climbed down from the booth, we asked him where he was going and if he needed the toilet, was he finished and could he please wait to be excused. He took two steps back so he was outside of the booth…bit still very much in the centre of the dining room. I realised too late what he was going to do and reached for him…on a couple of occasions he had broken wind at the table at home, I told him that was not nice to do around food so he should polietley leave the table.

At home he goes into the hall, here there was no hall.

So of course he farted, loudly, with a really innocent look on his face. The tapping of forks and plates and idle chatter stopped. Everyone stared.

I could not decide whether to cry with laughter or be aghast. Instead I said quietly…’what do you say?’

He did a half bow/curtsey and said, ‘excuse me everybody.’ I couldn’t really tell him off for the manners I taught him. Must try harder. You try and be a good parent and it backfires, literally.

Put me off my ice cream. Might lose some weight after all. 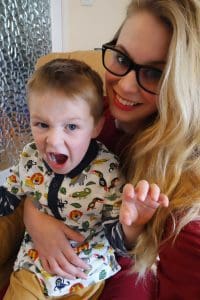 I’m Jade, a multi award nominated Parenting Family & Lifestyle blogger. My blog is a colourful mishmash of my day-to-day experiences and heartfelt posts from the times where I wished I had another mummy to hit me on the face with a soggy nappy and say, ‘you can get through this, it’s OK if you are wearing yesterday’s pants’.