Christmas is my favourite time of year.  I can rival my kids in the excitement stakes.  I can never sleep on Christmas Eve, despite the fact that I am a 38 (very nearly 39) year old adult.  There is something truly magical about the festive season.  Christmas lights can bring tears to my eyes (I was a sap before kids, I stood no chance after).  I love following the traditions of my childhood for my own children, and making new traditions too.

Last year I decided to introduce the big one to The Elf on The Shelf after it flooding my Facebook news-feed.  It looked cute.  A nice idea.  Another way to reinforce the good behaviour threat.  A new tradition for my family.  Easy. 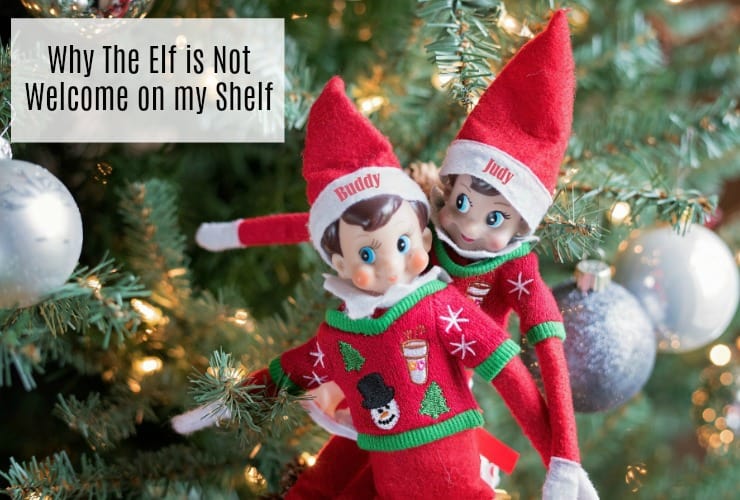 Here’s how it went down…

Day One of The Elf on The Shelf

Inform husband that I have decided to do The Elf on The Shelf and set about purchasing said Elf.  Pick myself up off the floor after seeing the price of the cheeky little imp and re-think the whole idea.

Catch a trailer for Santa Claus the Movie on television and get swept up in a wave of Christmas nostalgia.  Decide The Elf on The Shelf is back on, only with a different elf, not the actual elf.

Day Two of The Elf on The Shelf

Trawl the shops for some kind of elf.  Buy more decorations for the tree in the process.  The husband will be pleased (insert sarcastic tone here).  Can’t find a bloody elf anywhere, and beginning to get shoppers rage.  Induced by hearing ‘All I want for Christmas is you‘ for the filth time.  It’s all Mariah’s fault (I’m more of a Pogues kind of girl).  Find a snowman ornament and decide that will do.  Henceforth the Elf on The Shelf shall now be known as The Snowman on The Shelf.  At least in our house anyway. Crack open the Christmas chocolates way too early because I deserve them after that ordeal.

Day Three of The Snowman on The Shelf

Begin planning the execution of The Snowman on The Shelf.  Type a letter to the big one from the Snowman explaining who he is and what he is doing here.  Feeling pretty pleased with my creative genius.  Begin to plan where the Snowman will be each day and what antics he will have gotten up to. Up to day 4 with no problems.  This is fun.  Begin to falter.  Come up with ideas for days 5 and 6. Struggling now.  Run out of ideas.

Eat more of the Christmas chocolates for inspiration and brain fuel. Look at my to-do list for Christmas and wonder if my time could be better spent.  Refer to Mr Google and Mrs Pinterest for some inspiration.  Less inspired and more a complete feeling of inadequacy.  I am not a creative genius after all. Finish the chocolates.  Steal four of the less messy and inexpensive ideas and decide 10 days of The Snowman on The Shelf is plenty.

Inform the big one that he has a letter.  Read the letter from The Snowman on The Shelf and introduce him to said Snowman.  There is much excitement and the feeling of Christmas magic is in the air.  Feel all warm and happy, and rather pleased with myself for creating a wonderful and magical Christmas for my children.  This is going to be amazing.  Before bed hang The Snowman from the living room light ready for the big one to discover in the morning.  Don’t sleep very well worrying that the Snowman is going to fall off the light before the morning.

Day Five of The Snowman on The Shelf

The big one seems to have forgotten about the whole Snowman thing.  Ask him if he has seen The Snowman this morning.  When he replies “no” suggest he looks for him.  Begin the longest game of hot or cold ever.  Everytime I say “hot” the big one goes in the opposite direction. Repeatedly explain the concept of hot and cold.  He’s not getting it.  Start to panic that we are going to be late for school.  Feign excitement and over-the-top enthusiasm that I have found The Snowman.

The big one’s interest lasts approximately 30 seconds before he starts watching TV.  That didn’t go as I expected.  Tell myself to hide The Snowman in more obvious places.  Adopt a “where would I look for something if I was a five-year-old?” approach.  Ponder an acceptable time to start drinking mulled wine.

Day Six of The Snowman on The Shelf

The Snowman is sitting on the TV cabinet with the remote in his hands.  The big one spots him easily and finds it hilarious.  We are back on track.  The big one begins asking lots of questions about The Snowman and his relationship with Father Christmas.  Begin to feel like I am under interrogation and I am going to tie myself in knots.  Panic that I haven’t thought this through.

Don’t they say with lies to keep it simple?  The Father Christmas bit is easy. Straightforward.  But now I’m telling lies upon lies about this bloody snowman.  What if he talks to the kids at school?  Who else has got a bloody snowman staying with them in the run up to Christmas?  This is going to be a disaster.  He’s going to figure it out and the joy of Christmas will be ruined forever, and I will be branded a liar for all eternity. Suggest a Christmas movie to stop all the questions.  Break into the second box of Christmas chocolates.

Day Seven of The Snowman on The Shelf

The big one discovers The Snowman on The Shelf playing with his cars.  Seems a bit put out by this. The Snowman is returned to his shelf and the big one spends the day eyeing him somewhat suspiciously.  At bedtime he asks a lot of questions about where The Snowman will be tomorrow.  He seems worried.  Put it down to a sharing issue and make a note not to let The Snowman play with his toys.

Day Eight of The Snowman on The Shelf

The big one is refusing to come downstairs.  He doesn’t want to see the snowman.  The snowman is scary.  He doesn’t like him coming alive and he doesn’t like him watching him. When he puts it like that it does sound quite creepy.  Next come the tears.  Full on heaving sobs with puppy dog eyes because, “The Snowman is going to tell Father Christmas that he doesn’t like him and then he won’t get any presents.”  Holy mother of god what have I done?  My parenting halo was tarnished before, but now it looks rusty.

Cuddles and reassurance are administered, along with a promise that Mummy and Daddy will send The Snowman back to the North Pole, with a letter explaining that the big one has been a really good boy but the snowman can’t stay with us.  Offer him the remainder of the Christmas chocolates for breakfast to cheer him up (the halo has well and truly had it).  The Snowman on the shelf is sent back to the North Pole, never to be seen again. 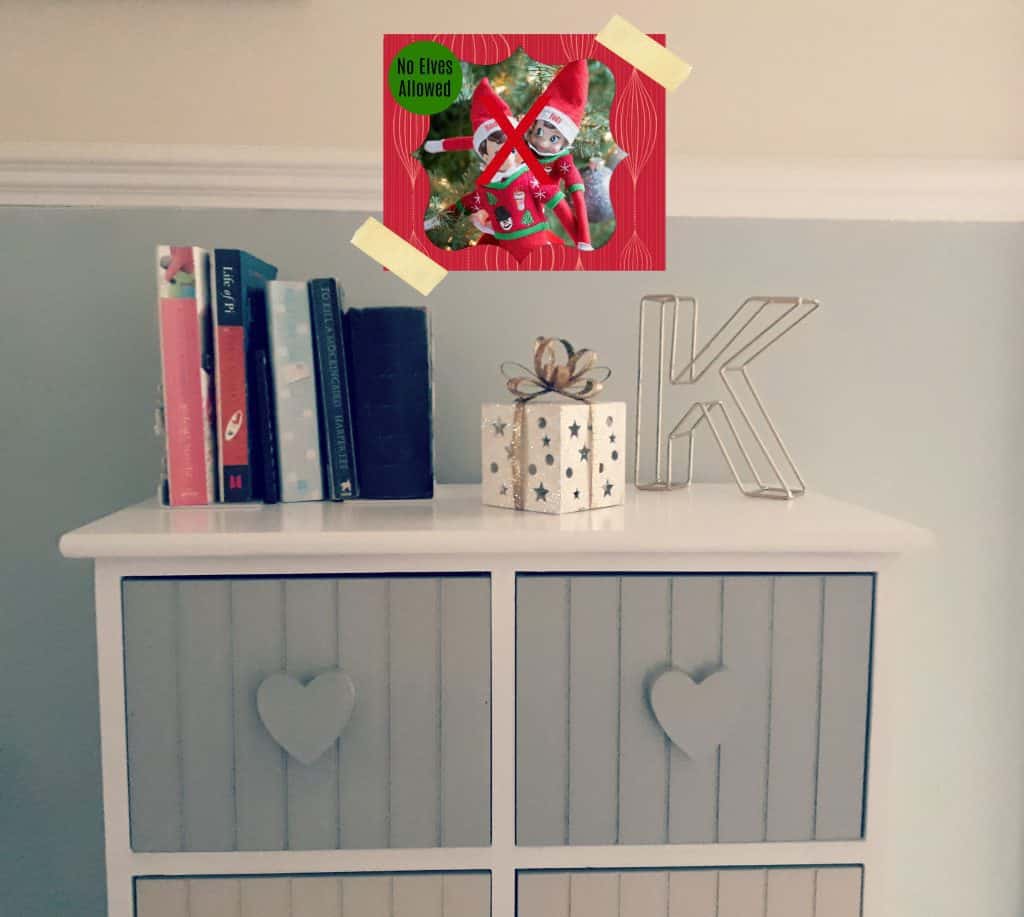 It’s fair to say that our time with The Elf  / Snowman on The Shelf was an epic fail and that is why this year he will be staying in the box.  We’ll find some other new traditions, simpler and less terrifying ones.

Edit: To the readers who took offence to this post…

When you write about certain parenting topics such as breastfeeding or being a stay at home mum you expect maybe a few strong worded comments.  (Especially when it’s shared on Netmums!) However much you try not to be controversial, people have strong feelings about such subject matters.  When I wrote this post about an elf I never expected it to be controversial.  It’s an elf!

At the end of the day it’s just a funny story about what happened when we tried Elf on the shelf.  If I thought Elf on the shelf was a bad idea I wouldn’t have tried it.  I am not judging anyone who does elf on the shelf, in fact I am in awe of your creative skills.  It just didn’t work for us.

It’s two years since I wrote this post and there seems to be no permanent scars to my child, thanks for your concern.  And I don’t think I have sucked all the fun out of Christmas (hard not to take that comment personally).  Slip me a few Proseccos and I am the life of the party.

I am also ware that you can now pick up an elf in the Poundshop.  However when I wrote this post you couldn’t.  And they were expensive!

If you didn’t find my story funny, then you probably won’t be interested in reading any more of my blog,  You definitely wouldn’t like my post about the time the kids had Chickenpox.  But please be assured that this post was intended to make you laugh not cause offence.

If you did find it funny, thanks for ‘getting me’.

Either way, elf or no elf, funny or not funny, Merry Christmas. 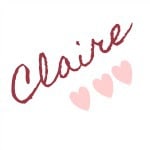 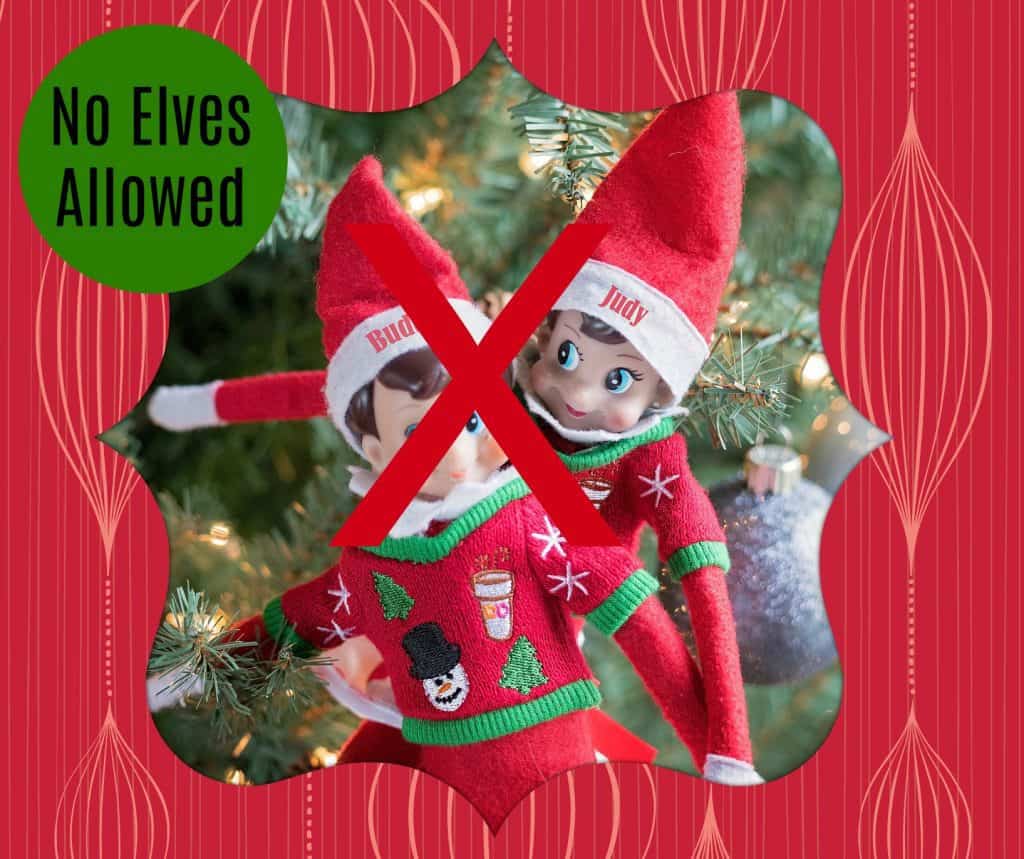 Are you an Elf on The Shelf lover or hater?

This post was featured on Netmums, Tots100 Good Reads and Huffpost 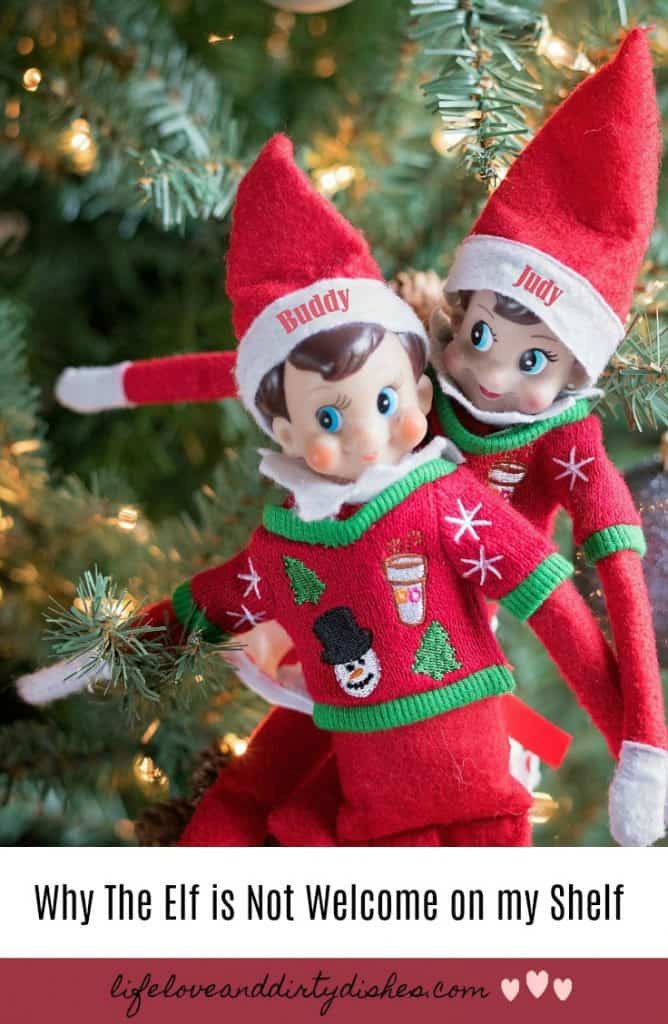