If we all obeyed these few simple facebook rules, then I’m sure we can get along fine.

Social media is such a powerful tool and can be used for great things.  There have been some amazing awareness campaigns in recent years.  The Ice Bucket Challenge is the first to spring to mind, raising awareness for motor neuron disease.  In October my news feed was lit up with candles and my eyes were filled with tears as I read about the Wave of Light campaign and stories of baby loss.  Then of course there was the huge #metoo hashtag where women shared their stories of sexual abuse and harassment. There is something very comforting in a group of people coming together in support, even in a virtual wold.

That being said when platforms such as facebook get into the wrong hands it makes me question how people actually get through life with normal functioning relationships. 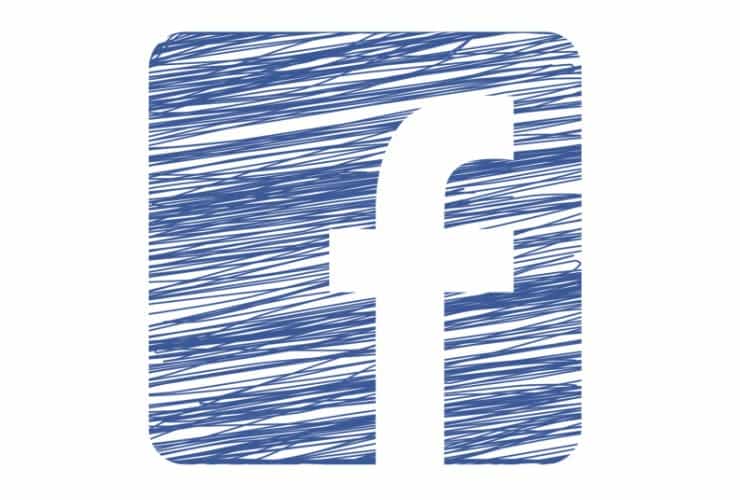 Asking people for recommendations is one thing, but asking what time your local Tesco’s closes is just dumb.  The person that answers is only going to google it any way, making them your very own virtual assistant more fool them.

You’ll only regret it in the morning, because chances are you have:

a) Come Across a bit needy

b) Said something you will really regret

c) Made some unforgivable grammatical errors

This one is a personal bug bear of mine.  How many intelligent friends just share random photos of someones picture with a ‘don’t trust this person’ and a story of what this person has allegedly done.  Firstly you have no way of knowing if this is true.  It could be an entirely fabricated story from a scorned ex-lover.  It could be true.  But if it is I don’t like encouraging vigilante action.

This actually happened to a blogger I know, Fran.  Her husband was walking their dog when the dog got into a bit of an argument with another dog.  In reality the dogs were separated, an apology was given and that should have been the end of the story.  24 hours later her husbands face was plastered over facebook and was painted as an irresponsible and dangerous dog owner, putting it mildly.  The comments on the post were sickening.  Please people, think before you share.  Read Fran’s story The day we were shamed on the internet.

4 Don’t Be An Attention Seeker

You know the kind of status updates I mean.  “Best Day ever!”  or “I am so angry right now”  Either share or don’t share.  Don’t do that weird i’ll tell you half of something and leave you hanging.  I’m nosy.  I wan’t to know what’s going on.

I actively avoid the news these days because it makes me so sad.  I love facebook as an escape.  As something to make me smile.  Of course people want to share pictures of their kids first day back at school.  It took me 3 hours to carve that pumpkin, damn right I am going to share it.  And in a world where parents are constantly judged and told they are doing it wrong, why shouldn’t we shout it from the rooftops that our kids are doing well.  Just be happy that people are sharing happy pictures with their family and friends.  Besides I don’t moan when you post gym pics or food pics.

6 Don’t check into hospital without an explanation

Especially when you then go radio silent.  I mean come on, are you OK?  Are you dead?

It makes me question why we are friends and more than likely we won’t be for much longer.

8 Don’t publicly announce that you are having a cull

You know the kind I mean.  “Having a facebook cull.  If I see you on the other side you are one of the lucky ones”  Go back to the playground.

9 Don’t put LOL after everything.

You’re not that funny.

People come in all shapes and sizes with a range of opinions and views on life.  Intelligent debate is welcome.  Just don’t be the dick that is offended by everything anyone has to say.  Don’t be the dick that leaves personal nasty comments.  There’s a thing called scroll.  Just scroll on by and get on with your life.

So there you have it.  The facebook rules.  Otherwise known as: Don’t be a dick. 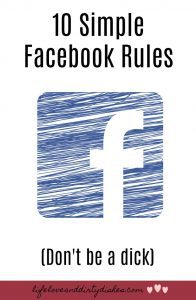