There are things I find in life incomprehensible.  Serious things like child abuse, and rape.  Not so serious things like the Star Wars phenomenon and the fact that at some point This Is us is going to have to end.  But I genuinely cannot get my head around the fact that a mentally unstable person was elected as the President of the United States.

The man is so deluded.

I used to love London as a city. I haven’t been there in a long time, but when they make you feel unwelcome, why would I stay there?
And when I say that, I am talking about government because the people of the UK agree with me.

No, Trump.  No we don’t.  And I can’t believe the 100,000 protesters and giant Trump baby blimp didn’t alert you to this fact.
There are so many words that come to mind when I think of Donald Trump, in fact so many that we can provide a dictionary of definitions of Trump. 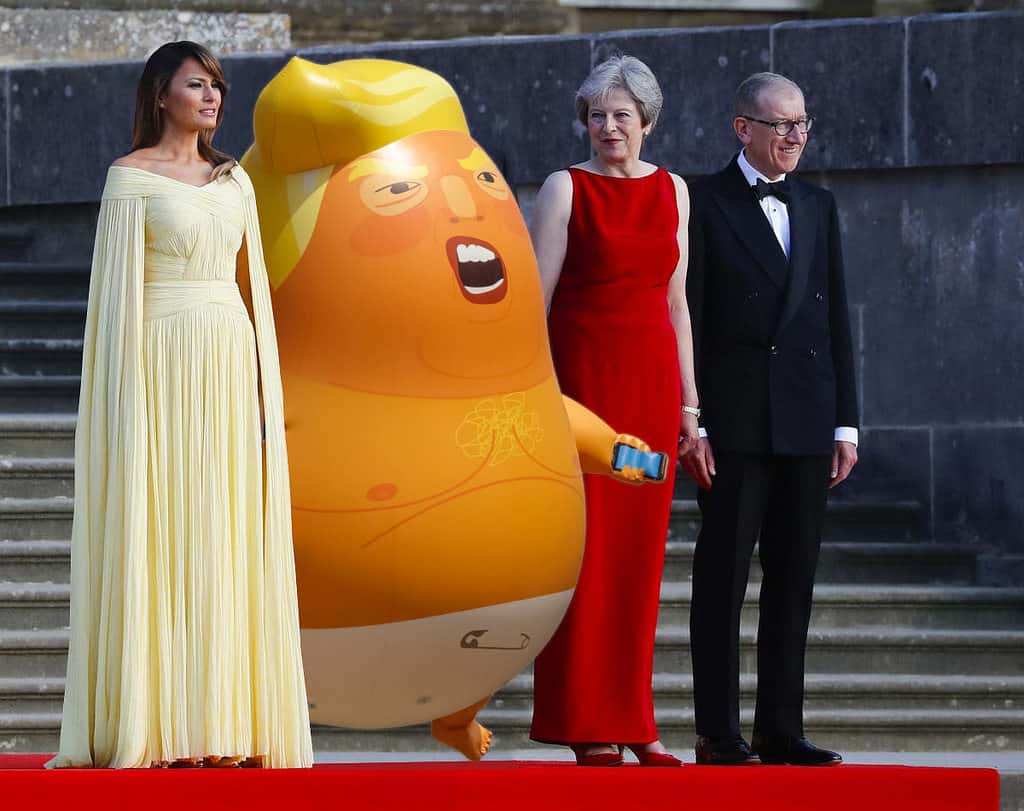 A is for Arrogant

With Trump it’s “his way or the highway” which may have made him a success in business but as POTUS he is having to make decisions which effect communities, communities that he shows zero empathy or understanding for.  Autism Mumma

B is for Bigot

Trump is so Intolerant towards those with different opinions to him that he builds a wall to keep them out.  The Strawberry Fountain

C is for for Covfefe

And other crazy words that Trump has tweeted. A Rose Tinted World

D is for Delusional

See my point above about the giant blimp.

E is for Ego

I think trump might have the biggest one in the entire history of the world.

F is for Fake News

Probably what he called the giant blimp.

F is also for farts (well he is named after one!)

G is for Gaslighting

Trump is gaslighting America on a daily basis. Discrediting truth and fact. He is complete denial when it comes to reality. He lives in a very different world to the rest of us. Island Living 365

H is for Hypocrite

Trumps tweets are a mine field of hypocrisy. Mums The Nerd

Doesn’t really need an explanation.  The man cannot answer a question.  Not unless the answer is actually “They love me” or “I’m great”  I don’t think either of those are ever the answer Trump.

J is for Jabberwocky

Because let’s face it, most of his vocabulary is nonsense. Raucous by Nature

J is also for Joke.

K is for Knob

L is for Liar

He has been caught out with so many lies now.  From the election campaign to sexual misconduct.  If the rhyme I learnt about liars as a kid is true, Trump must have an arse hotter than the sun.

M is for Misogynist

A person who dislikes, despises, or is strongly prejudiced against women

A man who thinks it’s ok to “Grab them by the pussy”and thinks women should be punished for having abortions, and would date his own daughter is a shining example of the dictionary definition of a misogynist.

N is for Narcissist

A person who has an excessive interest in or admiration of themselves. And now he has the biggest forum in the world for his self-promotion! Nuff said? Its a Tink Thing

O is for Orange

Orange as a wotsit-coloured toddler, Trump clearly doesn’t look in the mirror before he leaves the house. Or maybe he does, and Oompa Loompa is the look he’s going for? It’s a mystery. Whinge Whinge Wine

P is for Parasite

an organism which lives in or on another organism (The world) and benefits by deriving all that is good and right at the other’s expense.

Q is for Quarrelsome

I want to argue with EVERYTHING he says.

R is for Repetitive

He loves to repeat everything he says. Like he’s a really great guy, great guy, everyone he meets tells him how great. A Rose Tinted World

S is for Sex Offender

A predatory miscreant with zero respect for safety, human rights or decency, defensive and carefree over the notion of assault on another person. Actual Ar

S is also for Sexist and Sociopath

T is for Tweeter

The only person more idiotic than Trump, is the one who let him have a twitter account.  The man is going to start World War three with a tweet.

U is for Ugly

I know that beauty comes from the inside.  But his insides are U.G.L.Y

V is for Vain

He’s “great” right!  Well I know one person who believes it.  he’s named after a duck.

W is for Worrisome

Is it just me that worries about him throwing his toys out o the pram and pressing that button?

X is for Xenophobic

From his ‘war on immigration’, his ridiculous wall, to his travel ban. The man is a xenophobic bigot that incites racial violence  Mums The Nerd

Y is for Yucky

Z is for Zealot

Someone who is fanatical and uncompromising in his beliefs no matter how ridiculous, outdated or out of touch with his voters they are. How to feel sexy in big knickers

I think this should be Trump therapy.  Every time the guy does something that makes you want to hide under a giant rock for the next few years, come up with some definitions of Trump, call him some names.  It might make you feel a bit better. Throwback to when Little decided not to learn to w

Nothing beats the January blues quite like a barga

What followed this night was the worst hangover ev

RIP my beautiful boy. After being very poorly for

I may sound like a crazy cat lady, but my cat genu