This week I’m really pleased to have the lovely Sarah from Mum Muddling Through sharing her Rookie Mistake with us.  And I can offer much sympathy to Sarah as it’s a Rookie Mistake I have made myself, not once, not even twice, but three times!  In fact there’s definitely blog worthy material in my experiences.  But here’s what happened when Sarah went on a family photo shoot.

In the first twelve weeks of motherhood, life was a bit of a fog. I felt a bit of a state, and I was really struggling to feel like my normal old self whilst keeping my tiny human alive.

I don’t know what on earth possessed me to think it was a good idea, maybe it was the total FOMO of what everyone else seemed to be doing, but we booked in for a family photoshoot.

Whilst I’m not camera shy (especially not after a few glasses of sav blanc), the idea of standing in front of a proper photographer is daunting, even now. To say I wasn’t feeling my best, at 10 weeks postpartum is an understatement.

The hubby is also what you would call a camera-phobe. A handsome subject, don’t get me wrong, but when facing the lens he knows only to distort his face into an awkward looking grimace.

Yes, a professional photo shoot was exactly what we needed to capture this blossoming brand new family unit. After all, no amount of saying cheese into my Mums smartphone had managed to capture the magic shot, and believe me we’d tried.

So off we set, on an hours journey towards Royal Tonbridge Wells. Packed with a few outfit changes for baby Tigs, and a couple of different tops for us, not forgetting the normal anxieties for good measure – will there be somewhere to breastfeed the baby? What if she screams throughout? What if there is a poonami mid-shoot? But I’d blow dried my hair and even put on a bit of mascara so was feeling as good as I was ever going to.

We had seen some example work of this photographer, and I have to say it was enticing. Black and white shots of little tots in tutus and with tastefully positioned wooden furniture as props, fluffy throws and cute little hats. Yes, in my mind I could see the final images I wanted and they would be worth this hassle. As with so many of these scenarios the shoot was free and the only cost was in the images or prints you choose, so it was a can’t go wrong situation.

So, the next hour was spent trying to badly recreate the beautiful images we had seen, of other people’s newborns or six month olds. There was the holding baby up in the air shot, the on Daddy,s topless shoulder shot, and the family portrait.

Throughout the session we were tense to say the least. The small shop-come-studio was claustrophobic and we all couldn’t wait for it to be over. And soon enough it was, so we set off to find a café with a baby changing room and a quiet corner to feed the baby.

Some 4 weeks later we returned for ‘the viewing’, with absolutely no pressure to buy from the to be fair, thoroughly decent bloke.

Yet we did feel under pressure to buy the photographs, because they were the best of an extremely bad bunch of self taken photos. They were nice. They were quite sweet, and although all I could see was tired eyes and a ‘I was pregnant ten weeks ago’ body, the pictures of us were, alright.

And so, we started to choose. A couple of Tigs, one with Daddy, and better get one with Mummy. And the family portrait, which looked like it belonged on the walls of a stately home, black and white with the two of us sat formally alongside each other with our heads turned to the camera (and a very grumpy looking baby).

It was a long and tiring process, and with a wriggly 14 week old baby who was looking for her next feed, we just wanted to get out (again). As the photographer started talking frames and sizes, we were getting increasingly confused and overwhelmed. I kept asking him to point out a size from the wall gallery to get an idea but he kept talking dimensions. We eventually settled on a family portrait framed, a smaller one framed for our parents, and a triple frame with the mum-dad-Tigs shots. He then offered to throw in the disc and the remaining shots as prints for an extra figure which by this point we would have agreed to anything.

The final balance was something to behold. Crikey, I didn’t expect it to be that much. But I was so tired, and sure that this is a rite of passage all parents go through, we signed on the line. Let’s just say the three of us could have gone on holiday for the cost of those pictures, but that’s okay, because they were, y’know, nice.

Nice they would have been, in a 4×6 frame, or even a 5×7 on the mantelpiece. Let’s just say that when the parcels arrived containing what looked like a snooker table it took me a moment to realise exactly what was being delivered.

The ‘small’ portrait for the parents might have been bearable on the wall, but we could hardly give them the larger than real life size head shots now could we?

And so, the Beckham-esque framed portrait did hang on a very discrete corner of our home for a few months, until it took its final resting place behind the wardrobe, where it remains to this day.

I know exactly the kind of family shots I love. Relaxed, natural, outdoors. I just wish I’d come to out of my new Mum haze to realise this before handing over enough cash to feed a small orphanage for a month.

It may have been the same photographer as my friend’s beautiful shots, the same studio, but our child was a different age and we are different people. I also found out later she only bought a handful of unframed 5×7 prints.

Ah well, we live and learn.

My advice to you?

Timing is everything with a photoshoot – go teeny newborn or 12 weeks onwards.

Shop around, I can’t tell you how many incredible baby pictures we’ve seen since then which beggar belief as to how cheap they were in comparison to our hefty bill.

If you can, don’t take the baby along when you’re doing the choosing bit.

Don’t buy the frames at the photographers – this was a massive proportion of our costly mistake, if we’d just bought the disc of images we’d have saved a fortune on framing.

Think about it. Will you really want these images on your lounge wall in five years time? Do you really need them all?

Remember, if you’re planning a bigger family you might want to wait until your family is complete to do the epic photoshoot.

Know what you like… In my head I had visions of tiny feet in converse trainers or a newborn curled up on a fluffy blanket, all Anne Geddes style, and we were never going to get that with the package we walked in to.

Your hormones are everywhere so maybe decide on a budget and number of pictures before you leave home and stick to it. 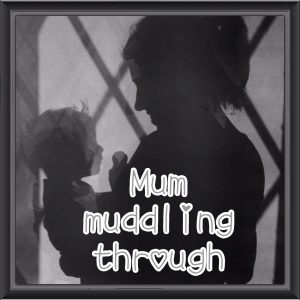 Mum muddling through is the place to hang out for imperfect parenting advice and a bit of blog based camaraderie. It ain’t no disco, but it ain’t no country club either. You can join Sarah for banter, random crap and a spot of #coolmumclub each Thursday via Twitter @mummuddlingthru, Instagram @mummuddlingthrough (shocker, she doesn’t do facebook).