Product Review, Review
If there is one thing that has always been consistent in our house, it’s the bedtime story. From when they were tiny, every night without fail, we read to our boys.

Like most parents I’ve lost track of the number of children’s stories I have read to my small people.  The favourites I know verbatim.  I’ve established a pretty strong repertoire of character voices over the last 6 years.  There are some fantastic stories out there, new and old.  But to be honest, there are some pretty awful ones too.  It takes something pretty special to stand out from the overcrowded bookshelf.

Emmy and the Whale  is that something pretty special. 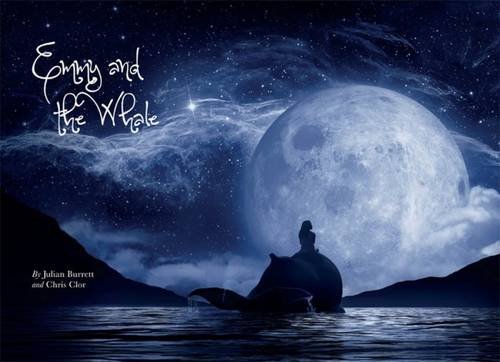 Emmy and the Whale is written by Juilan Burrett, and the Imagery produced by Chris Clor.

The combination of story telling and imagery in Emmy and the Whale create something magical, and my boys fell in love with the book instantly.  They can hardly tear their eyes away from the pages.

When a young girl hears a call for help, a fantastical journey through the night begins. Join Emmy and the Whale as they make their way across the sea in this beautiful, spell-binding adventure.

There are forgotten creatures, a lost city, a flying boat and a fairy castle.  So much to capture the imagination of small people.

The imagery in the book is simply beautiful.  The picture of the fairy castle, wow.  Just wow!  It’s like there are actual fairy lights on the page. 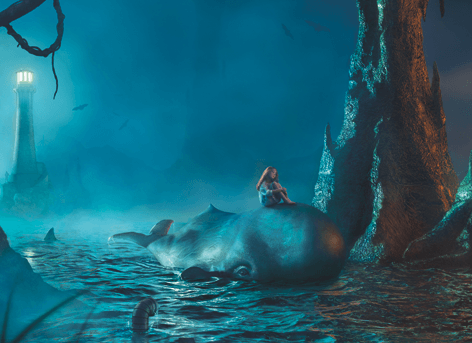 Julian and I studied the same course at University.  He recently informed me that next year will be 20 years since we started.  Ouch!  I met Julian on my first day.  He kind of reminded me of the BFG.  Very tall, wicked sense of humour, and quite often heard spouting random words.

Julian was notorious for both his creativity and his stuntman falls.  I cannot tell you the number of times I suffered near on heart failure when I saw Julian fall down a flight of stairs, only to find it was a ‘comedy fall.’  We used to rate his stunt falls by the reaction it got from those around us.  The more gasps and genuine horror, the higher the score.  I blame Julian entirely for the fact that I can’t help but laugh whenever someone falls over.

Nowadays Julian concentrates on the creativity more.  He lives in The Forest of Dean with his Wife, and their Son and Daughter. 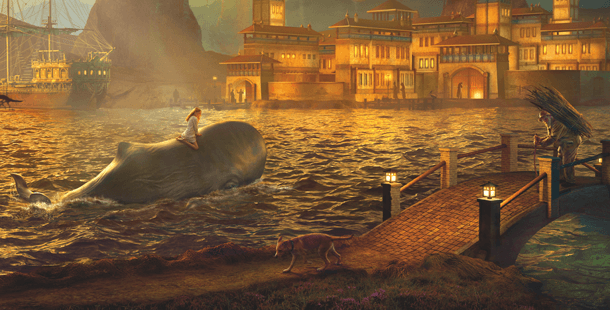 Why did you want to write a children’s book?

I didn’t start out wanting to write a children’s book. It was a story that popped into my head when I was on a boat around the time my first niece was born – over 13 years ago.  I wrote the story and drew each picture, which my mum coloured in watercolours. We gave it to my niece and then forgot about it. Then I met Chris Clor and fell in love with his unique visual style and asked him to take a look at the story…

What were you Inspirations for Emmy and the Whale?

I was helping to deliver a boat across the Atlantic.  There was very little do do on watch except making sure we weren’t crashing. My sister had had Emmy and my head was full of marine things and young kids. When a humpback whale surfaced right next to the boat, it all sort of came together.

What do you hope parents get from reading this book with their children?

One thing we always wanted to achieve with Emmy and the Whale was a sense of calm reverence for books. That’s something I remember from my reading time as  a child and something I believe we’ve lost a little recently.

The images in the book are incredibly unique and make the book feel so special.  Can you talk us through the thought process behind the images.

Chris creates the images with a mixture of photography and CGI. He has a very well respected advertising photographer, and that’s where he learned is craft, but I’ve never seen the technique used in this way in story books before. I don’t think there’s anyone in the world who can match his style, and his eye for detail and flair for creativity is mind-blowing.

What do your own children think of Emmy and the Whale?

My six-year-old son is very proud. He often asks for it at bedtime, but I think he’s trying to be nice to me. He’s very quick to tell people his dad wrote a book. My four-year-old-daughter is less politically sensitive, and not in the least bit impressed. She will ask for the story every now and then, but doesn’t seem at all impressed that I helped make it.

What was your favourite book as a child, and what do you enjoy reading to your children now?

Professor Wormbog in Search for the Zipperump-A-Zoo was may favourite children’s book by a clear mile. Peppered with crazy details and tiny side characters, this definitely had an influence on the desire to fill Emmy and the Whale with those little touches that make children want to lose themselves in it for hours. But in terms of pictorial style, it wasn’t really children’s books at all; the surreal artistry and elegance of Kit William’s Masquerade was always a favourite to reach for even though the pictures were quite disturbing and I didn’t understand it in the slightest. I never thought I’d have a hand in producing anything that beautiful until I met Chris.

Do you have plans to write any more books?

Absolutely. We’re about 80% of the way through book number two and we’ve just started shooting number three. Altogether, we have five stories ready to go so it’s only time and money stopping us.

And a few parenting questions….

I run a series on my blog called Rookie Mistakes.  People share their epic parenting fails, once enough time has passed that they can laugh about them.  Can you share one of your rookie mistakes with us.

Perhaps you can’t get a bigger epic fail than messing up the birth itself. Very nearly.  2010 was the coldest winter in our area since herds of steamy mammoth roamed the land. It was also the winter of our first throw of the parenting dice and, for no particular reason, we thought we’d try for a home birth. In our new home. And with the pool puffed up and ready to perform in the kitchen, the due date approached along with increasing snow depths and lengthening icicles.

We live in the country which means, among other things, we have to make sure our oil tank is topped up for heating and hot water. ‘We have got enough oil, haven’t we?’ my wife would ask with annoying regularity. Sometimes I’d check and sometimes I wouldn’t but all-in-all I was quietly confident.

That is until D-day. As soon as our projected drop zone arrived, there was a ominous clunk as the boiler drained the dregs of its now empty tank. Apparently there’s a thing on the tank you have to pull to truly asses the oil levels, but my wife didn’t seem interested in the details. I rang the fuel company to schedule a delivery and discovered we weren’t the only ones caught unaware – the next available date was some time in June. The prospect of home-birth looked at best chilly, at worst completely impossible.

But, cometh the hour, cometh the man. And if big oil wasn’t going to help me, I was going to be the hero of the house and sort it out myself. So I puffed out my chest and plodded through the knee-deep snow to introduce myself to my new neighbours, with a bucket and two-metres of hosepipe by my side.

“Hello, I’m Julian. My wife about to give birth, is there any chance I can syphon some of your oil please?”.

The plan worked. Eight hours of sucking kerosene and humping to and from our house yielded enough fuel to fire up the heating system and get the show back on track. Not without it’s affect on my system though – between the chemicals I accidentally ingested or dribbled down my now-rotting chin I was so ill I was bordering on tripping, and the flesh falling off my face gave me the appearance of a zombie fresh from dining.

A two-week delay in proceedings was most welcome, and by the time sprog #1 rocked up the oil delivery company had managed a reshuffle. All’s well that ends well, and I even managed to achieve the unexpected bonus of being taken off tank-checking duty forever.

Are you the parent that you thought you would be?

No. I thought I would be a live-and-let-live, laid back kind of a dad like that cool turtle in Nemo, or Adam Sandler in big daddy. Instead I find myself too impatient, too shouty and far grumpier than I ever would have imagined. I can still hear my younger self promising that ‘when I grow up I’ll let my children do whatever they want’, but when I do I tell him to pipe down and eat his vegetables.

What’s the best bit of parenting advice you ever received?

Sleep is a biological necessity. It doesn’t need to be induced with singing, cooing or rocking. You just need the will to wait long enough and put up with the (false) sounds of torment. We didn’t listen. 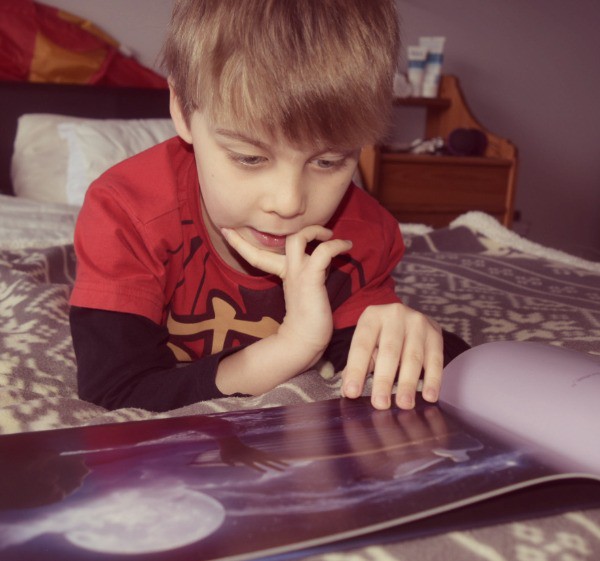 Emmy and the Whale is a beautiful keepsake, and I’m not just saying that because I know Julian. He has no dirt on me as far as I am aware to be able to bribe me with!

Please visit the Emmy and the Whale website today and purchase your copy for £10.*

Open to UK Entrants Only.

Emmy and The Whale Book Giveaway

*Not including postage and packaging.

15 Comments on Emmy And The Whale – Interview & Giveaway