Letter of Complaint to the Special Delivery Service 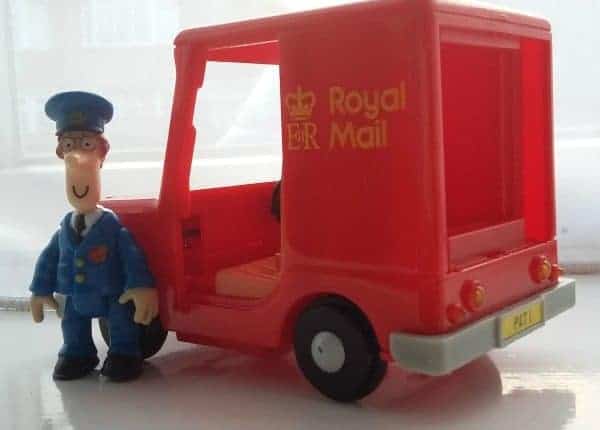 To whom it may concern at the Special Delivery Service Head Office,

As a resident of Pencaster I have become increasingly concerned with the actions of our local Special Delivery Service mail man, who goes by the name of Pat Clifton.

I have known Pat for many years and I have turned a blind eye to many things such as taking his pet to work with him every day.  In these modern times I understand the need for The Royal Mail to branch out and keep up technological advances, and with so many Post Offices facing closure you really do not need any scandals.  I do not wish to get Pat into trouble but I feel you should be made aware of a few things.

To be honest I have several concerns about his driving qualifications.

He uses numerous vehicles, and whilst the van and motorbike do not concern me, I am dubious as to his qualifications for flying a plane and a helicopter. Especially as the man has never left Pencaster to obtain such licences.

There have been several rumblings around the village as to Pat’s tardiness.

Special Deliveries are often made ‘in the nick of time’ with many reported problems along the way. I’m not one to indulge in village gossip, so up until now I have stayed out of the matter.

Now let me begin by saying I’m not entirely sure why Alf Thomson thought it would be a appropriate to have a cow delivered via the Special Delivery Service.

Live stock is not something you normally put  stamp on.

Give Pat his credit where it’s due, he is very committed to delivering everything that comes through the distribution centre.  However in this case I really do feel he was not qualified to carry out the job.

I have been reliably informed by Ted Glen that the cow, who goes by the name of Daisy, escaped not once, not twice, but three times whilst in Pat’s care.

And regrettably this is not an isolated incident.  I am aware Pat has also lost a parrot by the name of Bernie whilst in his care of a Special Delivery.  Not to mention Pumpkin the horse and some bats.

That is a considerable amount of livestock being delivered through the Royal Mail in Greendale.

Back to the matter in hand.  It was after the third escape that Pat used the Special Delivery Service helicopter to lower our resident vet Amy Wrigglesworth onto the cliff where Daisy was stranded.  Amy then attached a hoist to Daisy and Pat flew her to Thomson’s farm.

Another mission accomplished for the Special Delivery Service.

But I have to point out how dangerous this mission was.

Firstly Daisy was not sedated for her flight in any way, and I’m sure this breaches many animal welfare laws.

Secondly I’m not sure delivering post qualifies Pat in any way for mountain rescues.

Thirdly I have to question the weight ratio of a highland cow and a helicopter and how safe this really was.

And finally I am very concerned that Amy Wrigglesworth is still on that cliff with no means of getting down.

Some would commend Pat for going above and beyond the call of duty to accomplish his mission.  I am not some, I feel he was reckless and put lives at risk unnecessarily.

I do feel you should look a little more closely at the practices of the Special Delivery Service in Greendale.