There are many many moments with my kids where I have a kind of out-of-body experience.  I see myself and wonder ‘what the hell am I doing?’ These moments aren’t when I’m dressed as a cowboy having a disco in the lounge and singing along to One Direction.  Those are the normal moments.  I’m talking about the times that I kind of hope no one is watching and judging, because it is not my finest parenting moment.

For example, I once agreed that the big one could have his whole class round for tea after school.

Of course this never happened.  But why did I agree?  Because I wasn’t listening to him.  To be fair he had been talking at me non-stop for 20 minutes and I was trying to fill in some paperwork, so I just kind of zoned out and threw in the odd “Yes, of course” and “Ok”.

Cue a major meltdown and a lot of bribery once I realised and had to change my “Yes” to a “Hell no”.  Not my finest parenting moment.

Another moment was a lot more public and with someone else’s kid.  It was my son’s birthday party and our entertainment had cancelled at short notice, so I became chief party entertainer to 35 five year olds.  It’s not a skill I will be adding to my CV anytime soon!

I had exhausted all the party games and still had 10 minutes to kill, so thought I’d offer up the microphone for a spot of kids karaoke.  A four year old princess (I’m not being rude, she was dressed as a princess) shot to the front, grabbed the mic and launched into her rendition of “Let It Go”. Kids party classic since 2014.

Now this little girl was giving it her all, but unfortunately her harmonies were akin to nails down a chalk board.  After the first chorus I very nicely suggested one of the other children might like to have a go.  She didn’t miss a beat.  She just kept on ‘singing’ and frowned at me.

I told her more firmly that it was someone else’s go.  Her frown turned into a glare but still she kept going.  People ears were beginning to bleed.

An hour and a half into a kids party my nerves were frazzled and my patience was wearing very thin.  With a fixed grin plastered on my face I grabbed the microphone thinking she would relinquish.  But no.  She held fast.  The result was me wrestling this four year old in a princess dress for the mic with both of us shouting “Let it go”.

She put up a really good fight*.

I figured I can’t be alone in these moments. 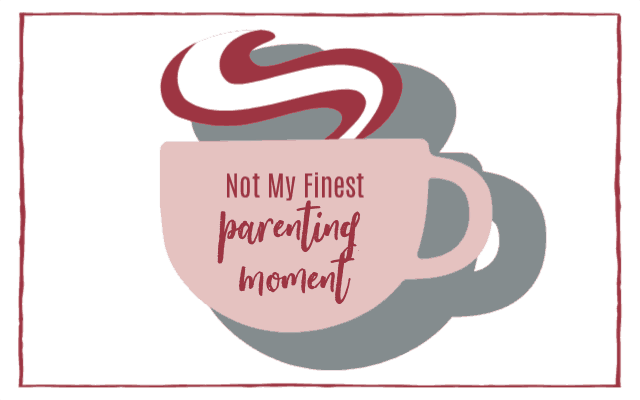 I’m normally pretty good with getting up in the mornings the slightest noise from one of the kids and my eyes are open. One time though I was so exhausted that I over slept leaving my two little ones in there room or about 20 mins longer than normal. I woke to hear my eldest shouting mummy mummy…

So I got up went to get them as I did everyday. However I wasn’t expecting what happened next. I can only describe it as like a scene from some sort of horror movie. My youngest boy had taken off his nappy for first time ever… In which he’d done a poo and there was poo everywhere the walls, his cot, on him seriously!!!  It was the worst thing I’ve ever had to tackle parent wise to date.

My daughter aged 4 (at the time) at a christening, kept asking why the vicar was angry. I said ‘he’s not angry’ She replied (at the top of her voice), ‘That man in the dress IS angry! He keeps saying Jesus Christ!’ Oops

My daughter (aged about 2 at the time) didn’t know the words to one of the hymns at a funeral, so she sang ‘If you’re happy and you know it’ instead.

When my middle son was at a soft play birthday party he came over and said he felt a bit sick. I checked him over and decided in my motherly wisdom that he was fine and had probably just had too much cake.

5 minutes later, he comes running over and before he can even speak he voms over the entire carpeted area of the soft play. You know, the corded carpet like you get in school that stuff (especially sick) clings to. It was over me (up my nose to be precise as I tried to cup the sick and it backfired into my face) over him, over the soft play and in front of half the parents of his class. I wanted to die.

Getting your priorities right (Uggs over babies)…

I was at a film set with my newborn daughter. Long story short she had been cast as a newborn for a television programme. She was all nude, ready to be filmed and I was holding her, waiting for her turn. And she had an almighty poop, right on me, all over my jeans and very expensive Ugg boots.

As I was faffing with wet wipes trying to get the yellow mustard poo off, I nearly dropped her. The runner brought me a towel to wipe my daughter and I just grabbed the towel, shoved my daughter to the runner and started wiping myself and my Uggs… Not my finest parenting moment! Thankfully I’ve been a better mum since.

Err Who Are you?

I called my youngest by the wrong name twice on his first day at pre school. The key worker then had to confirm his name as she thought she must have the wrong one written down.

I stupidly forgot a nappy for when we’d finished swimming, so I ingeniously decided to stuff her trousers with toilet roll for the car journey home.

When Rose was in the middle of potty training we risked an outing in big girl pants. She had a wee at the top of a slide in a busy park. I had to climb up with paper towels and slide down whilst frantically trying to clean the wee at the same time.

So proof that we are not alone in not being perfect or having those moments where you question whether this was what you signed up for. The parenting job description is severely lacking in detail.

*No children were harmed in the making of these anecdotes.

What has been your not finest parenting moment?! 21 Comments on Not My Finest Parenting Moment

The last two weeks have been really tough. Nothing

True story. Anyone else feeling their house gettin

So staying at home has taken my googling pictures

I've seen a lot of posts this week, about how we s