I haven’t decided whose fault it is yet but last night was a disaster.

It marked the end of a particularly stressful week.  The little piggies broke my computer and I lost a whole days work.  George caught a cold from jumping in muddy puddles which I am entirely blaming daddy pig for. And Peppa had a falling out with Suzy so there was much drama.  Not to mention that we had the ‘joy’ of the playgroup teddy come to stay. As if this wasn’t bad enough, Emily and Edmond Elephant had the teddy before us and Mummy Elephant filled out a whopping 4 pages of activities they had done with the teddy. Seriously? Who has that much time?  So now I have to find 4 pages worth of activities to do with a bloody teddy bear.

Last night I had invited Granny and Grandpa pig over for a dinner party.

I slaved away in the kitchen all morning preparing everything.  I spent the afternoon tidying the house, and doing 5 loads of laundry thanks to a wet week and lots of bloody muddy puddles.  I left myself just enough time for a quick shower before Granny and Grandpa pig arrived.  That quick shower lasted all of 2 minutes, yet still had 5 interruptions from the little piggies.  Can’t a pig shave her legs in peace!

The one thing that I asked Daddy pig to do was put Peppa and George to bed and make sure their room was tidy.  Ok, so that’s two things, but it’s not exactly rocket science is it?

For some reason Granny pig thought the little piggies would still be awake when she arrived, even though they have had the same bedtime since they were babies. She insisted on checking on them which is when the evening started to unravel.

A whole 30 seconds after their arrival.

Daddy pig had not tidied their room like I asked, which is why Granny pig stepped on a squeaky toy and woke Peppa and George up.

Half an hour she was up there whist I was desperately trying to save dinner from being ruined.  I wouldn’t be surprised if she was feeding them Percy Pigs rather than getting them back to sleep. Grandpa pig went up to ‘help’, and by ‘help’ I mean wind the little piggies into an excited frenzy.  Before I knew it there was all sorts of shenanigans going on upstairs, and none of it involved little piggies going to sleep.

It had now been an hour since we were supposed to eat and quite frankly dinner was beyond saving, and I was bloody starving. Daddy pig and I had some harsh words in hushed tones in the kitchen.  I blamed him.  He of course blamed Granny pig.

I may have threatened him with sleeping on the sofa and refusing certain privileges. 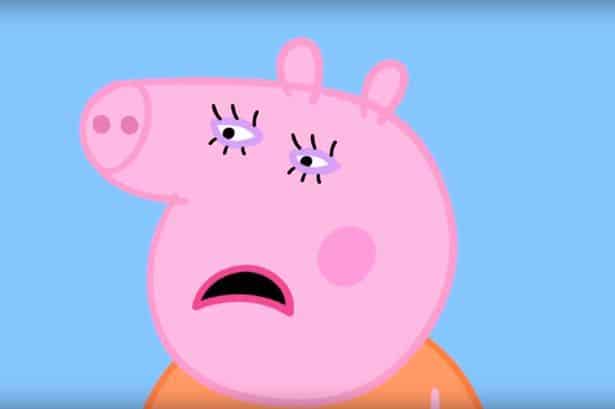 Daddy pig was dispatched upstairs to sort the whole mess out.  His idea and my idea of sorting the situation out somewhat differed.  I thought he was going up to put the little piggies to bed as by now it was nearly half eight, and I was already dreading grumpy little sleep deprived piggies the following day.  Apparently his interpretation of sorting the situation was to put on music and have a disco with the little piggies.  Seriously?  I was fuming.  Do I have to do everything around here?  Honestly, a few weeks ago Daddy pig was late for work because he thought it was Saturday, when it was in fact Thursday.  I sometimes feel like I have three children.

And he wonders why I don’t want anymore!

Anyway, I digress, I went upstairs to get the little piggies back into bed and asleep.   I sat down to tell them a story but Peppa insisted she was going to tell the story herself.  At this point I didn’t have the energy to argue with a 4-year-old.  Especially an over-tired and over-excited 4-year-old.  I’m rather embarrassed to admit what happened next, but to the great amusement of everyone else, I fell asleep. In my defence I had consumed nowhere near enough caffeine that day, and I have heard Peppa’s ‘Princess Peppa’ story at least a hundred times before.

So there you have it, my disastrous evening.

I think on reflection this one is entirely Daddy pigs fault.

If you are wondering about dinner, well Miss Rabbit delivered a take away.  Did they bother to wake me for it?  No!

Based on Series Three, Episode 14, “Princess Peppa”.  If you have small people of a certain age I’m sure you’ve seen it at least a dozen times.

You can find Peppa Pig on Netflix which means you might have 10 minutes to drink a hot cup of tea or go to the bathroom alone! 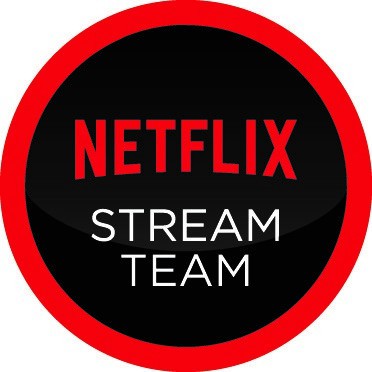 I am part of the Netflix #StreamTeam 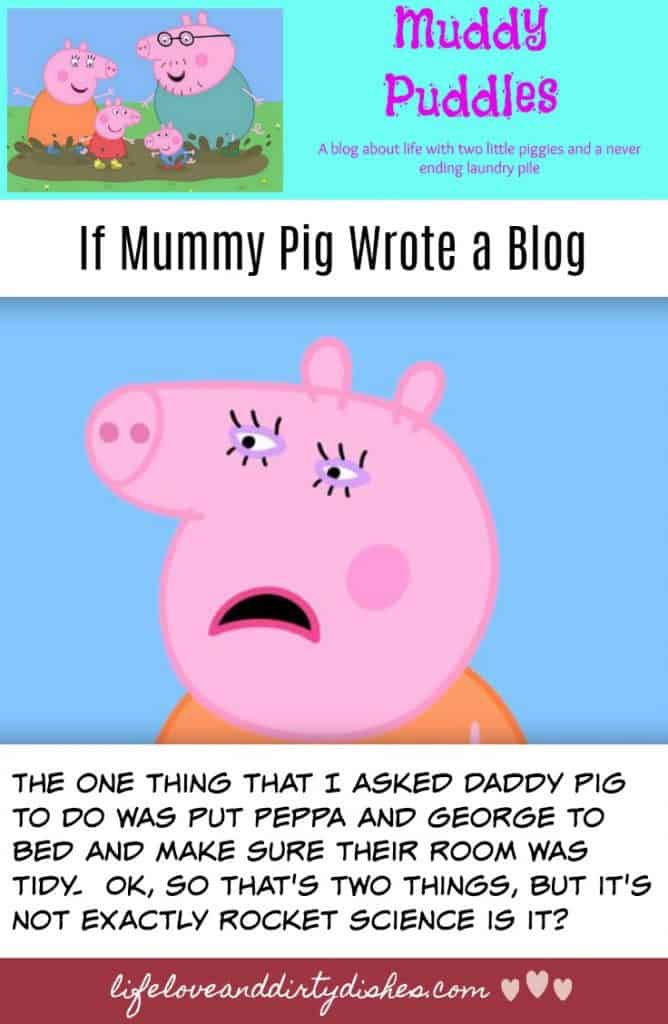 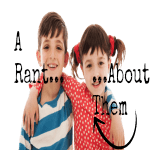 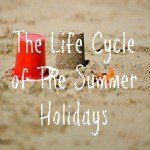 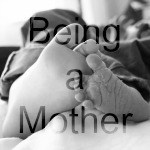 75 Comments on If Mummy Pig Wrote A Blog