I love Christmas.  It’s my favourite time of year.  I love the pretty twinkly lights.  I love that people are generally just a bit nicer to each other.  I get that warm fuzzy glow inside and I get just as excited as when I was 5 years old.  However as I far too rapidly approach my forties I have noticed that there are a few things about Christmas that make me fell a bit, well, bah humbug really. 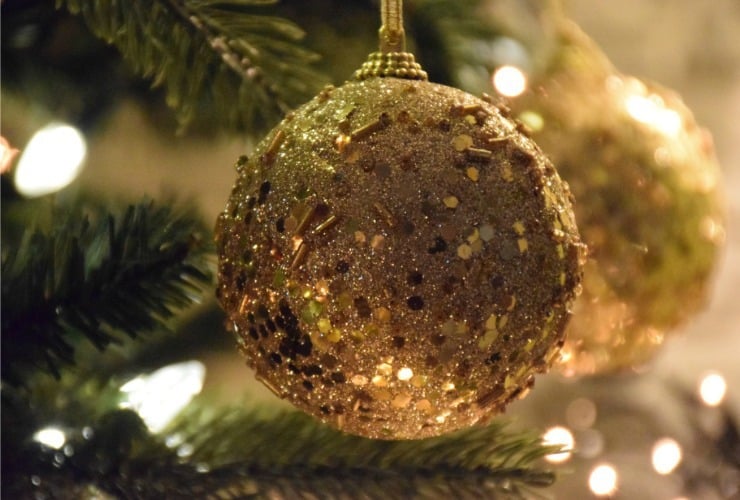 I love Christmas decorations.  Buying them in December becomes a bit of a habit that I have to wean myself off.  Thankfully it only happens once a year, because what was once a small corner of the loft reserved for the Christmas decorations, is now nearly the entire loft.  And what once took us an evening to put up, now takes an entire weekend.  In my defence, they are just so pretty!  But despite my Christmas decoration purchase habit, we decorate about 10 days before the big day.  I get that some people like to do it on the first of December and I can cope with that.  But what is it with people decorating In October.  OCTOBER.  It’s not Christmas yet.  Calm the f*@# down.

2 Ok, stop doing everything so early (you can peak too soon)

I’ve only just sent the kids back to school and the shops are getting out their Christmas stock.  Do you know what happens to Christmas chocolates bought in October?  They don’t make it to November.  Meaning I have to come back and buy more, and, oh, Ok I see what you did there Mr retailer.  But just stop it would you.  In October I am normally busy with Big’s birthday, Halloween, and planning fun things to do in half term to stop my kids bouncing off the walls.  I don’t really think about Christmas.  But apparently I should be.

I should have my Christmas planning nailed if I want my kids to have a magical Christmas experience, because guess what happens when you try and make a booking on the first of November for them to see Father Christmas.  They’ve sold out.  Sold out before the first of November!  I swear next year I need to plan Christmas whilst the kids are splashing in the paddling pool in the summer holidays.  And the kicker of it is that I am an organised person.  Seriously, my friends take the piss out of me for how organised I am.

Do you know what people have every day of every month of every year?  Birthdays!  I now spend a ridiculous amount of money on birthday cards in September just to stock up so I have enough for the rest of the year.  Why?  Because mid September the card shops are taken over by the Christmas bug and what was once an entire shop full of birthday cards gets reduced to one corner of naff cards that you wouldn’t send your Great Auntie Mildred.  Birthdays are relegated because Christmas is here.  In October.

4 People ruining the Christmas magic for my kids

Here is a fact about kids.  They hear everything.  The only exception to them hearing everything is hearing the words “get your shoes on”.  But everything else they hear.  So if you are in the same room as my kids please don’t talk about the time you discovered Father Christmas wasn’t real.  Likewise do not ask dumb ass questions like “Do you still believe in Father Christmas?”  Because until you asked him that question he had no reason to question it.

And finally, I know the magic will end at some point, but I am doing my best to keep it going for as long as possible.  When the day comes that my children no longer believe I will make damn sure they know not to ruin the magic for other children, because then they really will see what happens when you are not on the nice list.  Please don’t let your kid be the punk in the playground that tells them Santa isn’t real.

This one is for you Mumsnetters.  Every year there is a Mumsnet thread where people are outraged that some of us have the audacity to write a list of gifts they, or their children would like.  Well do you know what?  I like lists.  Lists run my life.  They keep everything organised and ticking over and make sure things aren’t forgotten.  Christmas lists are awesome.

Apart from the fact giving my kid the Argos catalogue and a pen and paper keeps them entertained for ages, there are some very practical reasons for a list.  It makes sure my kids don’t receive lots of stuff that either they already have, or that they won’t really play with because its not what they are into.  Wouldn’t you much rather spend your money on kids gifts that will genuinely light up their faces and be a much loved toy, because you know, it was on their list?  Or would you rather go rogue and waste your money buying something that I will re-gift.  Yes Mumsnetters, I do that too!

Christmas brings with it a lot of pressure.  The perfect gift within budget of course.  Having the time to buy, wrap and deliver everything on time.  Am I the only one that still has Christmas cards to deliver in January?  What I don’t need is Pinterest perfect Mum making me feel inadequate with her handmade Christmas decorations and edible snowflakes.  Seriously who has time for all that sh*t.  You know they sell decorations in the shops right?  You can get them in September if you really want.

I’m all for keeping it simple.  Driving round the streets looking at Christmas lights whilst singing Christmas songs.  That right there is Pinterest perfect.

My wrapping standards have slipped since having kids.  In my pre-children life I prided myself on the appearance of my gifts.  Yes, I would go back and slap myself if I could.  Oen year I wrapped everything in brown paper, with tartan ribbon and green twine with red beads.  It took me the whole of December to wrap my gifts.  Then there was the year I bought beautiful gold glitter paper from M&S.  It wasn’t ordinary wrapping paper.  Oh no.  This was cover everything with two square foot with glitter wrapping paper.  The husband actually hoovered me after I had finished wrapping.  When we delivered gifts we left a glitter trail wherever we went.

These days I keep it simple, like I said, no ones got time for that sh*t now!  But surely the standard requirement of wrapping paper, the one thing it has to do, is ‘wrap’ the gift.  Your kind of stealing my thunder and the element of surprise when the wrapping paper is so thin you can see through it.  It’s against the trades description act surely, if you are see through wrapping paper, surely you are a tissue paper.

I remember when the January sales used to start on the second of January.  Nowadays it’s only the crap no one wants left on the second of January because the sales start so early.  And what really gets me is that I’ve been organised, I bought everything early because I had this sense of panic that time was running out and Christmas was a lot closer than it really was.

Why?  The shops were full of stuff in September, people had their decorations up in October and my news feed was full of countdowns in November.  Plus I wanted to have everything organised so I could be super-mum and make December fun and do lots of Christmas crafts and games with the kids.  So I did it.  I finished my Christmas shopping in November and felt relieved and very slightly smug.  Then you started the January sales in December and reduced every damn thing I bought.  The clue is in the title people.  JANUARY sales.

10 Taking The Decorations Down

What I do care about is people telling me off for taking the decorations down before the 6th, and telling me I am a humbug.  I didn’t tell you you were INSANE for putting you decorations up in November (not to your face anyway – unless you read the first part of this post)  so leave me alone to make a knot of these fairy lights, because my husband really enjoys untangling them every December.

I do honestly love Christmas, I just wish we could contain it to December.  You can have too much of a good thing!

What makes you feel a bit bah humbug.