My son’s school has a Jumper Dumper.  It’s essentially a large bin where all stray jumpers are ‘dumped’.

It smells slightly odd.  It’s frequented by frantic parents who rummage through whilst silently praying to the Gods of lost property that the jumper is in there, whilst lecturing their offspring on looking after their possessions, and mumbling things like, “Well where did you last have it?”

Why are we frantically rummaging through a bin of other people’s clothes?

Probably because we spent hours last September labeling everything with our child’s name in an effort to avoid the Jumper Dumper.

Probably because it’s the third jumper ‘lost’ in as many weeks.

Probably because we’ve already paid for after school clubs, school trips, a costume for the latest dress up day, and bought cakes from the cake sale to raise money for the school.

Probably because it was the last jumper without a dubious stain that you were hoping might last another school year depending on the summer growth spurt.

Probably because your child’s hectic social life has involved 4 birthday parties this month which means 4 lots of birthday presents.

Probably because there was a double whammy this month where both children needed new shoes, and you nearly fainted at the till in Clarks when they told you how much!

Probably because it costs £230,000 to raise a child in the UK*.  And approximately 25% of that is spent on replacing lost jumpers**.

So it may be just a jumper, but we really do hope it’s in that dumper!  Sometimes we strike gold and find it first time.  Sometimes we have to wait until the jumper is discovered in a washing pile in another home.  Sometimes they never make it back to it’s rightful owner.

I have been tempted to make a ‘LOST JUMPER’ sign and stick it to lamp posts around the school.  Or maybe I could sew in some kind of GPS device.  Their must be an app for that, right?  But more than likely, I’ll see you at the Jumper Dumper after school. 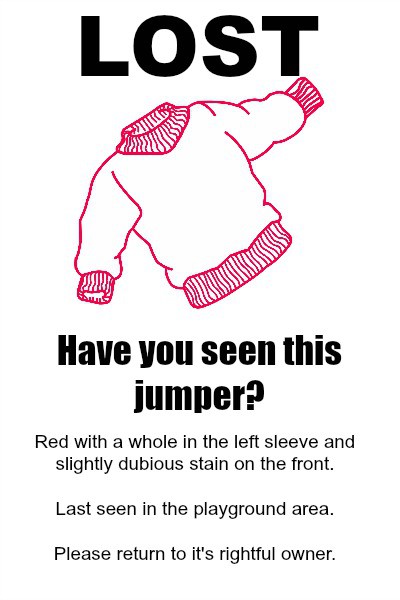 * A true fact from the Telegraph

For all the latest posts subscribe to my weekly newsletter below or follow me on my social networks.

Whenever I have had a 'challenging' day of home sc

(gifted) In my head this was going to be a suspens