I try very hard to understand that we all have different parenting techniques.  There isn’t a one size fits all approach, for either parents or the children they are parenting.  I hate the mum wars and the debates about breast verses bottle, stay at home verses working, and so on.  We are all doing the best we can.  However there are two parenting areas that I feel very strongly about.

The first is vaccinations.  I have no time or patience for anti-vaxers.  It’s science and it’s our social responsibility.  End of.  If that stance offends you, then so be it, because the anti-vax stance offends me.

The other one is probably more controversial.  It might well offend you.  If a video game is rated 12, it should not be played by anyone under that age.

Therefore Fortnite is not suitable for Primary school kids. 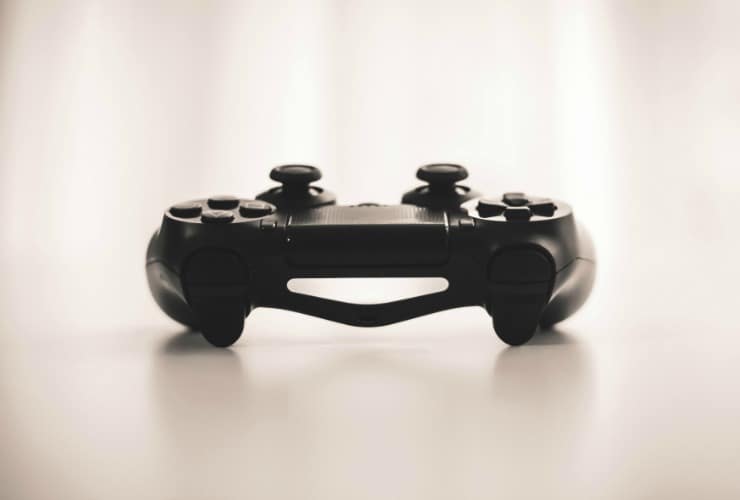 I am very strict with my children when it comes to tablets and games.  My eldest didn’t get a tablet until he was 8 and it has restricted use.  This is for various reasons, and again I feel each to their own when it comes to whether or not you allow your kids to use tablets.  What I have a major problem with is allowing children, please note the word CHILDREN, to play games that are not age appropriate.

Fortnite is the game that all the kids are talking about at the moment.  My eldest son included.  But I do not let him play it.  I have read so many articles, including from the NSPCC about the addictiveness and unsuitable content of this game that there is no way I would let my child play it.  Not to mention the guidance rating is 12 and he is 8.

I know with any fad comes outcry.

Loom bands were a chocking hazard.  Fidget spinners could make you go blind.  My son had both and I believe that it’s a case of commonsense.  But when it comes to Fortnite I am on the side of those causing the outcry.

Children are subjective.  And I hate the idea of exposing children to violence.  I am thankful that in the UK my children can go to school without fearing gun crimes.  I simply cannot comprehend how America plead ignorance in the name of the fourth amendment.  So the idea of a game where you go around shooting everyone in sight makes me feel sick.  I do not want guns to be part of his play.

Now if you are a grown up and you are capable of making your own decisions, of understanding consequence, of knowing right from wrong,  If you can cross the road without being reminded to look both ways, if you can get your shoes on when leaving the house without having to be asked 20 times, if you know that Hogwarts is not a real school, then go ahead and play your shoot em up games.   I have no problem with that.

But children should not be playing them.

My son is a good kid, but he is still learning, he doesn’t think his actions through all of the time, a lot of the time he still reacts to things on impulse.  He is still learning how to handle emotions, and little things can be a really big deal.  He realised he had forgotten his watch halfway to school the other day, and we had no time to go back.  As far as he was concerned it was the end of the world. He still believes in Father Christmas and the tooth fairy, and that is exactly as it should be.  It is my job as a parent to guide him and help him navigate his way through the world.

I studied Psychology, and as part of that, child development.  Time and time again studies have shown that children watching an aggressive cartoon will copy the behaviour they have seen.  It’s not rocket science.  Children learn through what they see.  Would you let your child watch a movie where someone shoots everyone they see?  I know I wouldn’t.  So why is it in any way acceptable for them to play a game where they are rewarded for shooting everyone they see?

I was 14 when 2 year old James Bulger was abducted, tortured and killed.

Those news stories are printed in my memory forever.  I think it was because the persecutors of this hateful and unforgivable crime were just 10 years old.  They were the same age as my little brother, and I just couldn’t comprehend how they could do it.  What really stuck in my mind was the news reports that the movie Child’s Play was to blame.  A movie that technically had a rating that meant it should not have been watched by 10 year old boys.  Although it was disputed, because it is very difficult to prove, it stuck with me how much of an impression the things we see can have on us.

I had to ban the cartoon Horrid Henry in my house because it literally made my boys horrid!  And I know I am not the first parent to do this.

I am not saying that playing Fortnite is going to turn your child into a psychopath.  But we do not know what effect it is having on them.  We do not know what harm it is causing.  However, we do know that the guidance rating states it is unsuitable for those under 12

Guidance ratings are there for a reason.

PEGI provide the ratings for games in the UK and Europe.  Ratings are not based on the level of difficulty of a game but on the age suitability of the content of the game.

Members of the PEGI Council are recruited for their skill and experience from among parent/consumer body representatives, child psychologists, media specialists, civil servants, academics and legal advisers versed in the protection of minors in Europe.

These people know their stuff.

I’m not calling for Fortnite to be banned.  I just believe that ratings should be adhered to.  My son talks about kids his age being allowed to play games with an 18 certificate.  Would you let an 8 year old drink alcohol?  Would you allow them to watch a movie rated as an 18 due to it’s explicit nature, or violence?We cannot blame the games when children copy the behaviour they have seen.  The blame lies with the parents allowing them to be exposed to that content in the first place.

As parents we should be protecting our children.  Which means not saying “it’s just a game,”  but looking at what your child is doing in that game and what it might be teaching them.  Your child my well consciously understand that it is not real, but what are they subconsciously learning?

Do you agree with me?

Do you have any opinions that prove to be a bit controversial?

You can read more posts about hot topics here.

10 Comments on Fortnite is not suitable for Primary School Kids